Jay Leno was seriously burned when a car he was working on exploded in flames at his home garage.

The 72-year-old stand-up comedian and TV host is hospitalized at Grossman Burn Center with burns to his face.

In a statement released through his reps, Leno reportedly said, “I got some serious burns from a gasoline fire. I am ok. Just need a week or two to get back on my feet.”

On Sunday, Leno posted this Instagram photo showing him posing with his classic cars in his home garage.

Leno canceled an upcoming speaking engagement at a financial conference in Las Vegas on Sunday. A statement from the event organizers read: “His family was not able to provide us very many details, but there was a very serious medical emergency that is preventing Jay from traveling.”

Leno’s garage houses more than 150 classic and antique cars including a 1963 Jaguar XK-E, a 1968 Lamborghini Countach and a modern day Jet Bike.

Yung Miami Claps Back After Critics Slam Her Funeral Attire 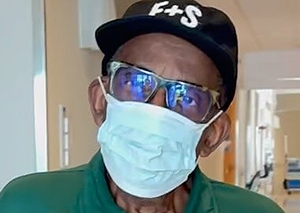