Selena Gomez left her kidney donor, Francia Raisa, out of her new documentary and named Taylor Swift as her only best friend.

The Grown-ish actress unfollowed Selena after the 30-year-old pop singer failed to mention her in a new documentary, My Mind & Me.

Selena revealed her struggle with bipolar disorder and lupus in the documentary.

Francia, 34, donated one of her kidneys to Selena in 2017 after the singer was diagnosed with kidney failure amid her battle with lupus.

Selena captioned the post: “There aren’t words to describe how I can possibly thank my beautiful friend Francia Raisa. She gave me the ultimate gift and sacrifice by donating her kidney to me. I am incredibly blessed. I love you so much sis.” 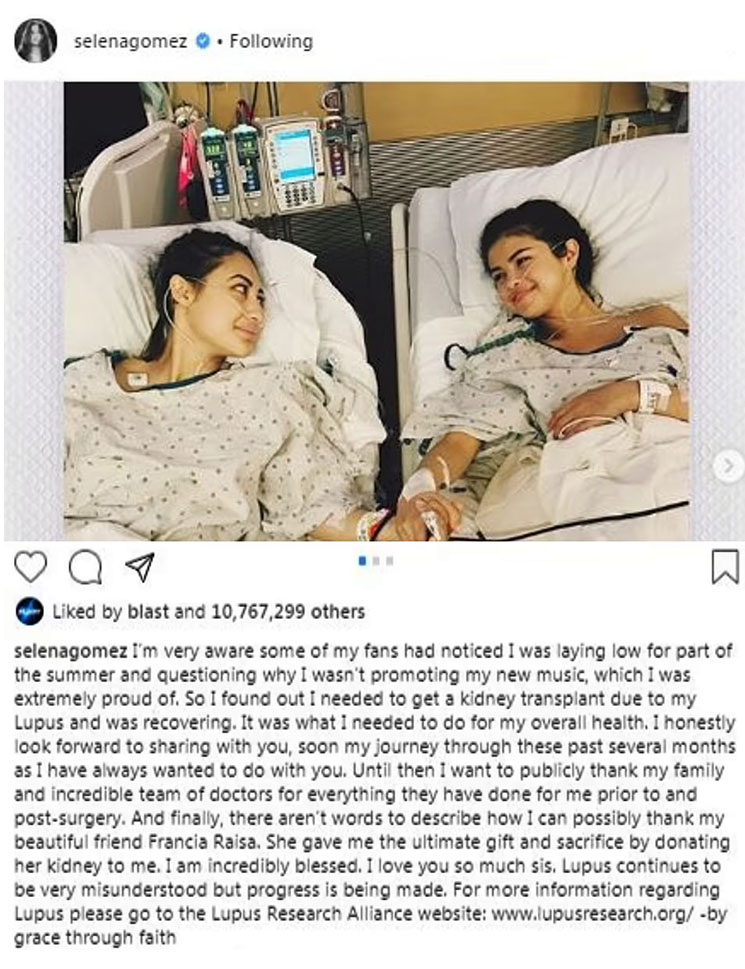 Selena shared Francia’s tweet on March 11, 2021, writing, “Thank you for blessing me. I am forever grateful to you.” 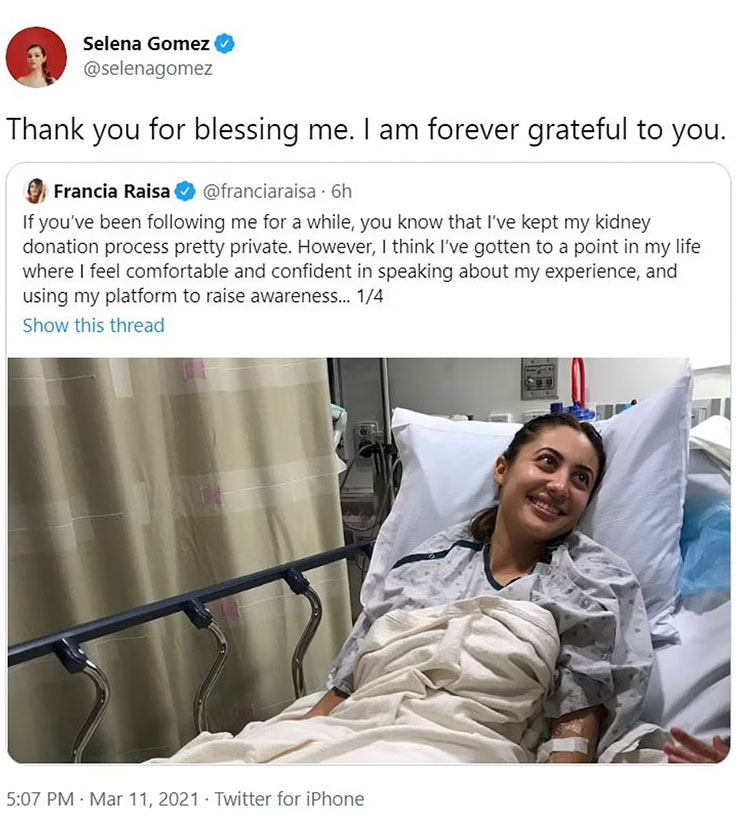 Selena and Francia have been friends for over 10 years and even referred to each other as “sisters.”

But the lovefest ended soon after the kidney transplant surgery when Francia chastised Selena for her “unhealthy lifestyle” and drinking alcohol after the surgery.

A TikTok user slammed Selena for sharing a video of herself drinking after her kidney transplant surgery.

“So one of your best friends gives you her kidney and you continue to drink excessively. Damn Selena,” the user wrote.

To which Selena replied, “It was a joke as*.”

Selena and Francia reunited in 2021 and were seen joking in a TikTok video in July 2022.

So it came as a surprise to Francia when Selena failed to mention her at all in her new documentary.

Francia unfollowed Selena a day after her documentary premiered and Selena named pop singer Taylor Swift as her only celebrity friend.

“I never fit in with a cool group of girls that were celebrities. My only friend in the industry really is Taylor,” Selena told Rolling Stone magazine last week.

She mentioned receiving a kidney in the Rolling Stone interview, but she didn’t say who the kidney donor was.

On Sunday, Selena left a comment under a TikTok video, writing: “Sorry I didn’t mention every person I know.”

TikTok users took Francia’s side and roasted Selena for being ungrateful.

In an interview in July, Francia explained how having only one kidney has changed her life and altered her diet.

“Because I have one kidney functioning and it acts as a filter to my body, I can’t consume as much protein. I eat a lot — I know I’m skinny, but I chow down — so that was a very huge concern for me when I talked to the doctor,” she told Yahoo Life.

Kidneys purify the blood and excrete toxins and waste products in urine. Kidneys also control fluid levels in the body by excreting excess fluids. Humans are born with 2 kidneys but we can survive with only one healthy kidney.

Pieper Lewis, 18, who was convicted of killing her rapist has escaped from prison