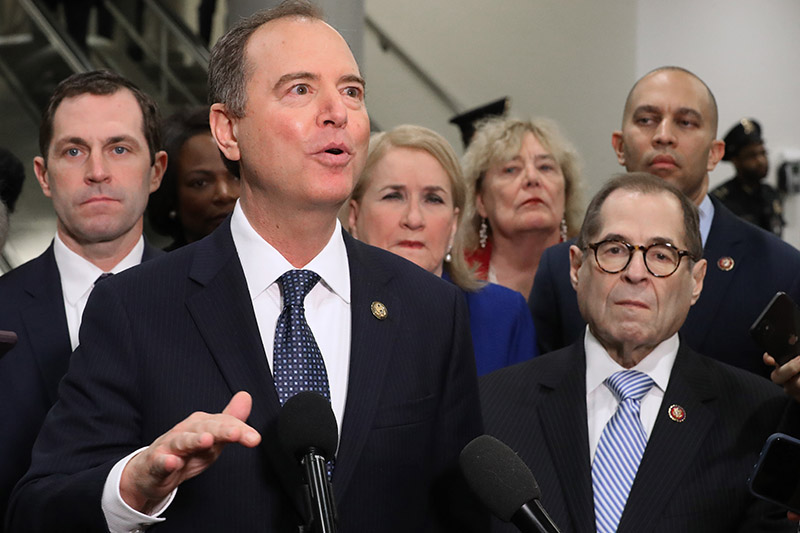 House impeachment managers made their opening statements on day 2 of Donald Trump's impeachment trial on the Senate floor on Wednesday, Jan. 22.

President Trump is on trial for abuse of power and obstruction of justice. He was impeached by House Democrats in December.

Now it's the Senate's turn to either vote to remove Trump from office or acquit him of all charges.

As Schiff's opening statement dragged on, some Republican Senators left their seats and disappeared into the hall.

According to the NY Daily News, at one point, South Carolina Senator Lindsay Graham was gone for 30 minutes. Other senators also disappeared for lengthy coffee breaks while Schiff spoke to empty seats.

Democratic senators who sat and listened to 9 hours of opening statements were dismayed and "disheartened" at the lack of interest shown by their Republican counterparts.

"I don't have any insight into what they're thinking, but there are moments in a trial when people vote with their feet," said Delaware Senator Chris Coons.

"Jurors don't get to do that in a real jury. We are acting as if [we're] a jury, and it is somewhat disconcerting to have folks absent for long periods of time."
But Louisiana Sen. Bill Cassidy begged to differ.

Cassidy, who took two 20-minute breaks, said it wasn't necessary for him to sit there and listen to the same evidence he has already heard.

"If they say something I've not previously heard I write it down. Just new facts, it helps me focus," Cassidy said. 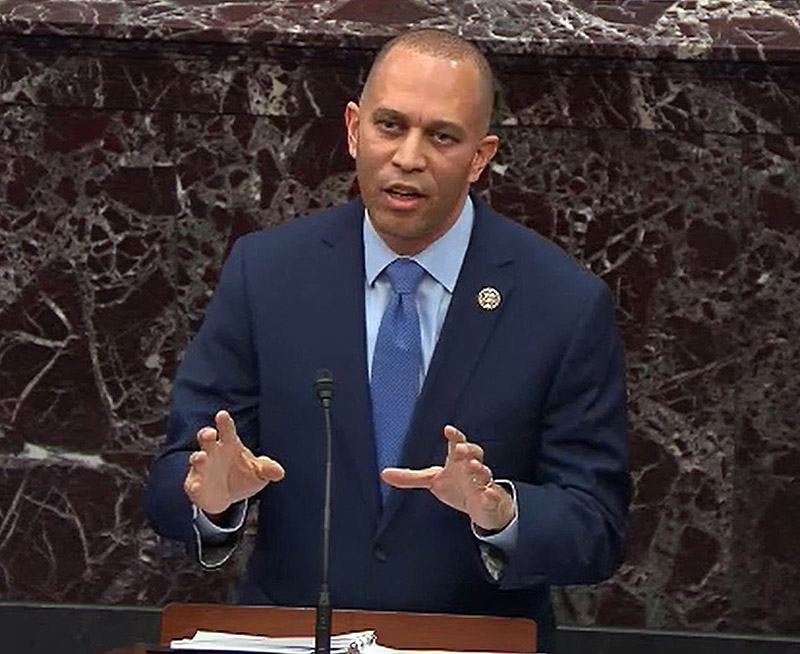 Hakeem Jeffries, who quoted the late rapper Notorious B.I.G., was interrupted by a heckler during his opening statement.

House Democrats hope to convince at least four Republicans to vote with them to allow subpoenas of records and key witnesses including national security advisor John Bolton and White House chief of staff Mick Mulvaney.

Republicans offered a horse-trading deal to allow testimony by Bolton in exchange for authorizing them to subpoena Joe or Hunter Biden.

Joe Biden, who was in Iowa speaking to voters on Wednesday, also said no to the deal.

"The reason I would not make the deal, the bottom line is, this is a constitutional issue," Biden said. "We're not going to turn it into a farce or political theater. I want no part of that."

There are rumors that Trump's lawyers may rest their case without any rebuttal. But Trump's legal team denied the rumors.

"There's a lot of things I'd like to rebut," said Trump's top lawyer Jay Sekulow, "and we will rebut."

After the rebuttal, the Senate will vote to acquit or remove the president without calling any witnesses.

President Trump, who is attending the economic forum in Switzerland, is optimistic of a quick acquittal.

"We have a great case," he told reporters.

Trump said he didn't object to Bolton or other witnesses testifying during the Senate trial, but he claimed "national security" concerns might prevent them from doing so.

Trump blocked Bolton and other key witnesses from testifying during the House impeachment hearings in December.

The Senate trial is expected to wrap up next week.

President Trump's long-awaited Senate trial is underway on Capitol Hill. After dispensing of pre-trial procedures last week, the Senate opened Trump's impeachment trial on Tuesday. The trial is expected to wrap up as soon as next week.

Trump was impeached by Nancy Pelosi's House Democrats in December for asking the Ukrainian president to investigate Joe Biden and his son Hunter Biden for corruption and interfering in the 2016 elections.

Adam Schiff said Trump has the right to call witnesses, but Schiff warned Trump's high-powered defense team not to call Hunter Biden as a witness.

Schiff, who heads the Democratic managers for the House, insisted that calling Biden as a witness would amount to "abuse".

Republicans accused Biden of using his power to enrich his sons who earned tens of millions of dollars while Biden was vice president to Barack Obama.

"It would not be appropriate for the president to seek to call witnesses merely to try to perpetuate the same smear campaign that was foiled when his plot was discovered," Schiff said in an interview on the CBS Evening News.

"Hunter Biden, for example, can't tell us anything about whether the president withheld military aid, whether he withheld that aid to coerce Ukraine to conduct political investigations or how he wouldn't meet with the president of Ukraine."

Schiff added: That's an illegitimate abuse of the trial. The chief justice, who may have an opportunity to rule on material witnesses, as well as senators should not permit that kind of abuse."

House Speaker Nancy Pelosi and House Committee chairpersons announced the articles of impeachment in a press conference on Tuesday, Dec. 10.

“The framers of the Constitution prescribed a clear remedy for presidents who so violate their oath of office,” said House Judiciary Committee Chairman Jerry Nadler, D-N.Y. "No one, not even the president, is above the law."

The Democrats claim Trump tried to enlist a foreign power to investigate corruption by presidential candidate Joe Biden and his son, Hunter Biden, in the Ukraine.

This makes the third time the Democrats have tried to impeach the president in the last 2 years. The previous two times they were unable to get the votes necessary to proceed with impeachment. But this time they might get lucky.

Nadler said the articles of impeachment meet the Constitutional requirements to charge "the president with high crimes and misdemeanors."

"Trump has engaged in unprecedented, categorical, and indiscriminate defiance of the impeachment inquiry," Nadler said.

"He has given us no choice," Schiff said of Trump. "To do nothing would make ourselves complicit in the president's abuse of his high office."

Nadler added that Trump interfered in the 2016 elections, and now the 2020 election. 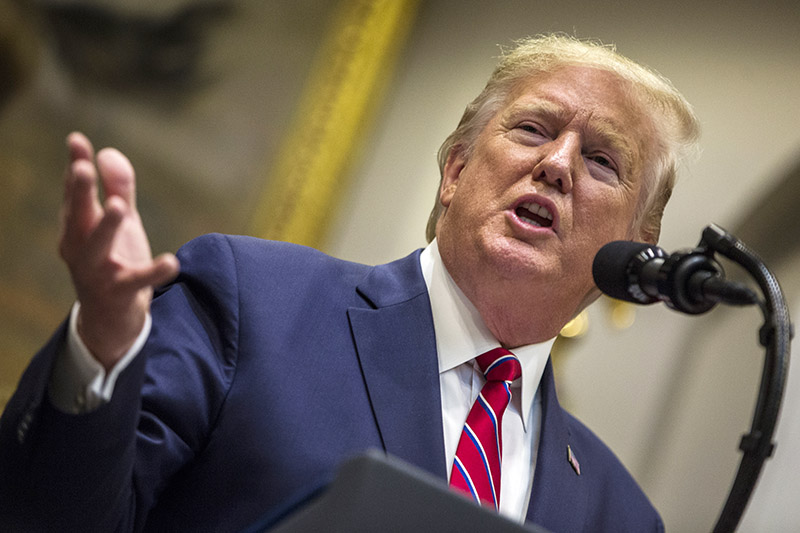 As usual, Trump fired back with both barrels blasting the inquiry as a "WITCH HUNT".

"Nadler just said that I 'pressured Ukraine to interfere in our 2020 Election.' Ridiculous, and he knows that is not true. Both the President & Foreign Minister of Ukraine said, many times, that there 'WAS NO PRESSURE.' Nadler and the Dems know this, but refuse to acknowledge!" Trump tweeted.

Then Schiff refused to allow the whistleblower to testify. But isn't that their entire case against the President?

Yesterday, I was reminded that the Republicans also tried to impeach former President Barack Obama. I was asked if I forgot about those hearings held by the Republicans when Obama was in office? Yes, I forgot. Mainly because I wasn't paying attention.

I suspect that millions of Americans aren't paying attention to these impeachment hearings or the previous efforts to impeach Trump.

They will make their voices heard at the ballot box in November 2020. That's the American way. 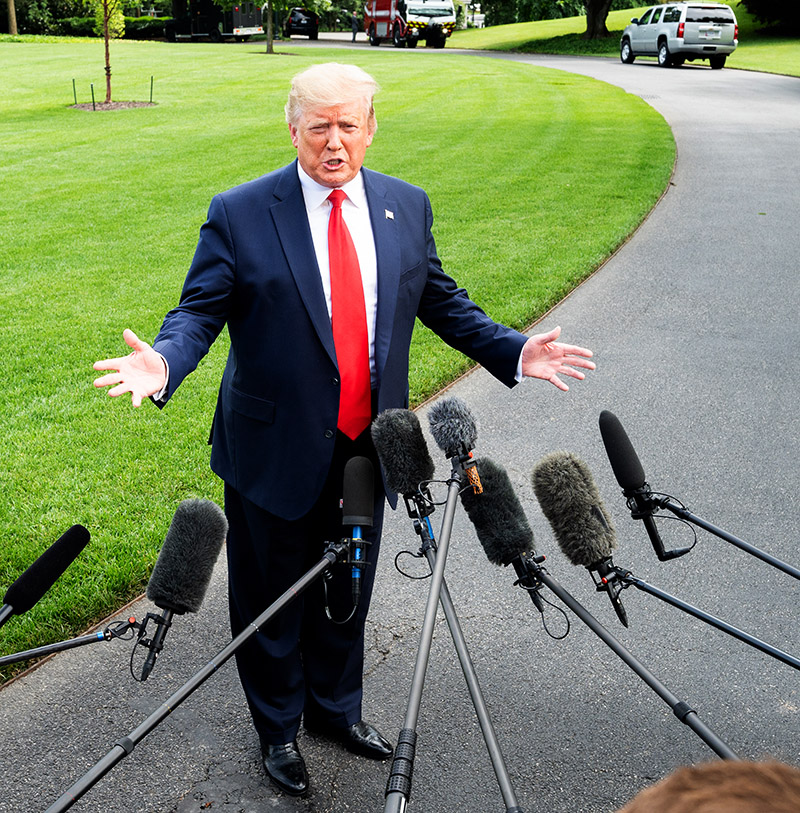 The Democrats promised to push forward with impeachment proceedings against President Donald Trump after Special Counsel Robert Mueller turned over his long-awaited report on possible election meddling that exonerates Trump of any guilt.

END_OF_DOCUMENT_TOKEN_TO_BE_REPLACED

President Donald Trump alienated the intelligence community when he referred to top intelligence officials as "naive", "Passive" and "weak".

Trump's latest outburst comes a day after members of his own national security team contradicted some of his biggest policy claims.

END_OF_DOCUMENT_TOKEN_TO_BE_REPLACED

Rep. Adam Schiff, a top Democrat leading the House Intelligence Committee's probe into Russian meddling in the elections, was pranked by 2 Russian radio comedians who claimed they had nude photos of President Trump.

President Trump and Schiff lobbed insults at each other on Twitter.com this week, with Trump calling the leading Democrat "Little Adam Schiff."