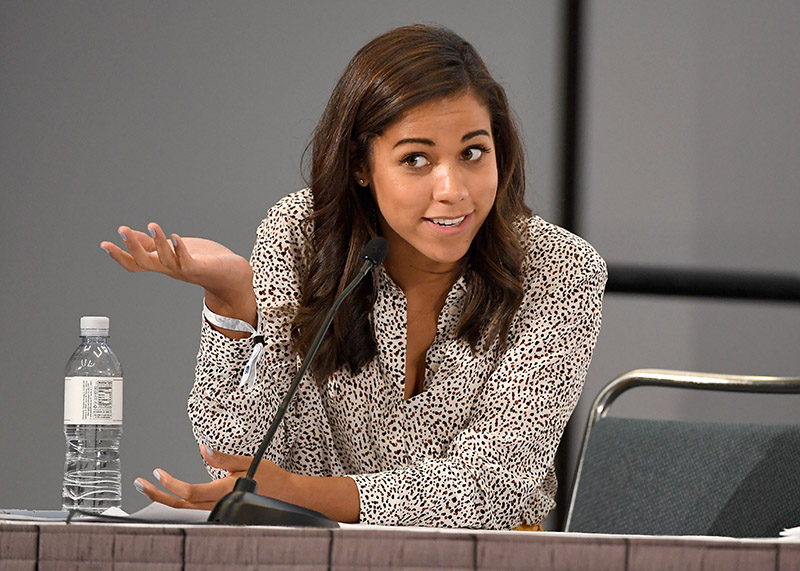 Alexi McCammond stepped down as editor of Teen Vogue after racist and homophobic tweets resurfaced from a decade ago.

McCammond, who was 17 when she wrote the tweets, apologized profusely after the internet recirculated the old tweets earlier this month.

The tweets included comments about the appearance of Asian features, derogatory stereotypes about Asians and LGBT+ slurs.

Screenshots of the old tweets were recirculated after Condé Nast announced her new gig at the helm of Teen Vogue on March 5.

As the outrage ensued on social media, Ulta Beauty and Burt's Bees, major advertisers with Teen Vogue, suspended their campaigns with the publication.

"I was happy to see a young, black, woman successful in a space that was NOT ALLOWED in my day but after reading her racist, comments... I am DONE! Sadly, she always seemed a little too cocky and now a racist, too!!!"

But others were willing to give McCammond another chance.

"How is our culture supposed to evolve if we can't forgive? She said these things when she was 17. Everyone here judging is secretly happy that they didn't have Twitter when they were ignorant teenagers."

"Wait that's it? She basically only states that asian people exist and are not without fault. This, when tweeted at 17, is supposed to ruin someone's career? Are you for fucking real? She's not the problem, you are."

The former record company intern and gossip blogger rebranded her image on social media using her surname as a marketing tool.

With the help of rapper Li'l Wayne and her Instagram model looks, Civil toured the country holding seminars under the slogan "Keeping it Civil."

END_OF_DOCUMENT_TOKEN_TO_BE_REPLACED

Banks was exiting the plane when she refused to wait her turn and tried to jump ahead of another exiting passenger. That's when a male flight attendant stepped in and blocked Banks' exit from the plane.

END_OF_DOCUMENT_TOKEN_TO_BE_REPLACED

Troubled singer Chris Brown spent the weekend in a Washington, D.C. jail cell after he was arrested early Sunday morning and charged with assaulting a man. Under D.C. law, scofflaws must sit in jail all weekend until they go before a judge on Monday.

According to a report on gossip blog TMZ.com, the incident happened around 4:30 a.m. outside a D.C. hotel where Brown was staying. Two women approached the singer and asked for a photo. While taking the photo with the women, a man photobombed the picture. A fight ensued and Brown allegedly punched the man in the face -- breaking his nose.

That's the victim's story. Brown's camp is telling a different story. They say the victim tried to enter the star's chartered bus. Both Brown and his bodyguard were arrested.