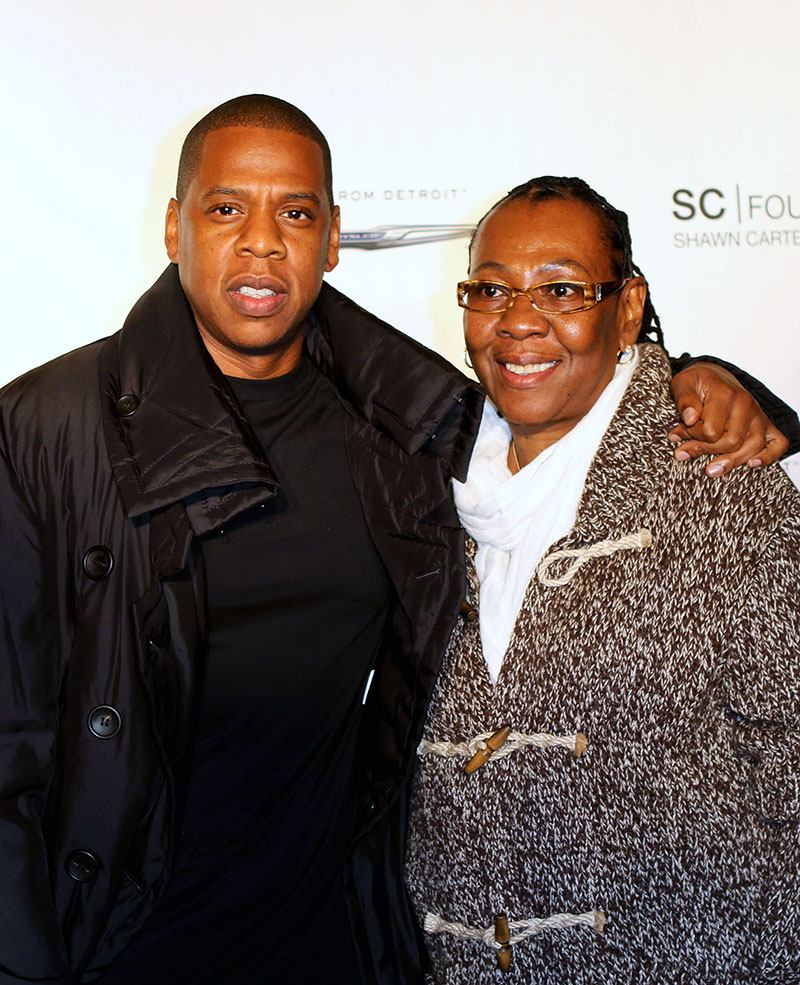 Jay Z's mother begged the rapper not to release his deeply personal track "Smile" off his thirteenth studio album 4:44 (2017), in which he talked about his mom's sexuality.

Gloria Carter was anxious about the song that detailed her coming out phase. Carter reportedly begged her son not to release the song -- even though her sexuality was no secret by then.

Carter eventually changed her mind and presented her son with a poem she wrote that he included on the record.

"It changed the dynamic of our relationship," he said during an appearance on The Shop: Uninterrupted.

"When she first heard that song she got super defensive... I was in L.A. and she flew out to L.A. and then she left and was like, 'No'. We talked through it. And then when she flew back to L.A. she had written a poem. She wrote that on the plane. It came with the American Airlines note pad... I was like, 'You got bars, ma!'"

During the barbershop-style chat with LeBron James and Bad Bunny, Jay Z revealed he still can't listen to his album 4:44 in its entirety because of its personal nature.

"It's a lot, but it had to be done," the rapper said of his last album.

"It was... an evolution of all the things that I'd been through... It was important to write... To be vulnerable in that space after you've done all this work... I had so many super gangsta rappers tell me, 'Thank you for that!' They would tell me on the side, 'You saved my relationship'." 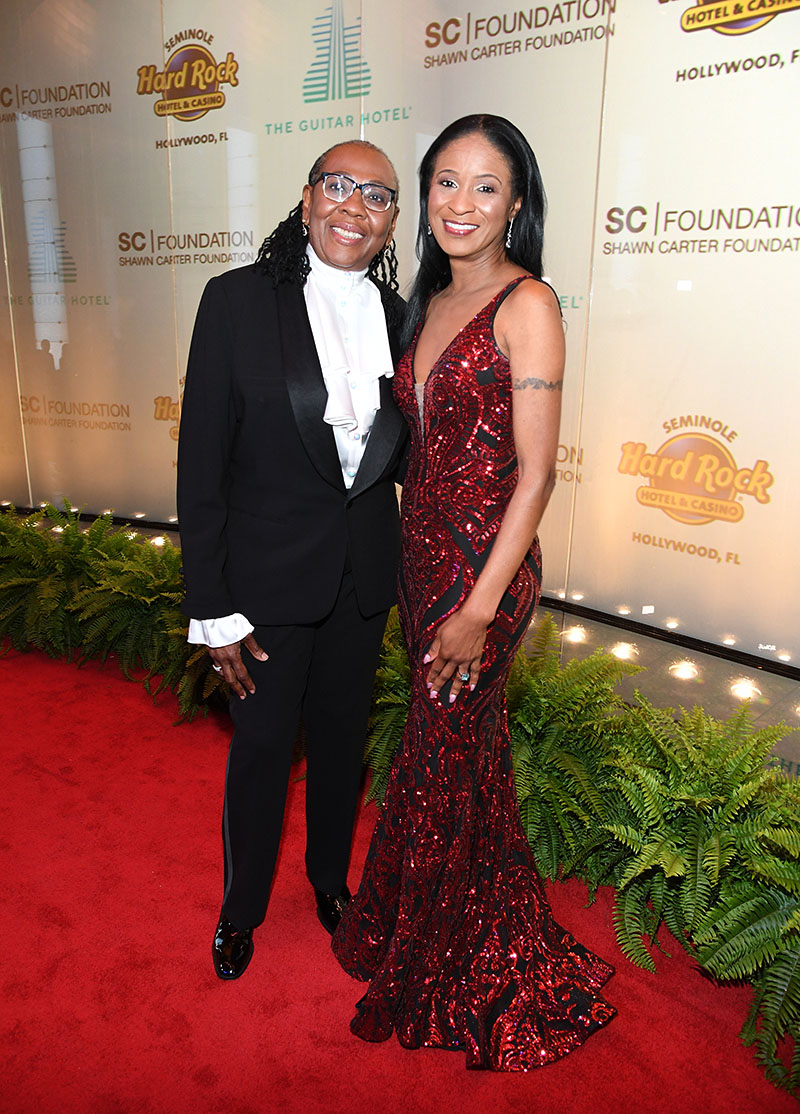 Gloria Carter and her date, Roxanne Wiltshire, posed for a photo at the Shawn Carter Foundation Gala on November 16, 2019.

Jay Z, real name Shawn Corey Carter, and his siblings were raised by their single mom in the Marcy housing project in Brooklyn's Bedford–Stuyvesant neighborhood.

His absentee father, Adnis Reeves, reunited with his children just before he died in 2003. That same year, Jay Z and his mother founded The Shawn Carter Foundation, which assists eligible students pay college tuition.

A 30-year-old woman was among 3 victims gunned down by a mentally unstable employee at a Kansas lawn mower manufacturing plant on Thursday.

Renee Benjamin was the only woman killed by Cedric Ford, 38, a painter at Excel Industries in Hesston, Kansas.

"Rest in peace Renee Benjamin may the good die young! I will never forget this day u were so happy u were surrounded by 3 cute girls lol #HesstonShooting#Ur in heaven now boo!"

END_OF_DOCUMENT_TOKEN_TO_BE_REPLACED

A Colorado woman won't face murder charges for cutting a fetus from a pregnant woman's belly. The 7-month-old fetus died shortly after it was violently delivered.

END_OF_DOCUMENT_TOKEN_TO_BE_REPLACED

A Texas woman charged with starving a 9-year-old boy to death 10 years ago was executed Wednesday evening. Lisa Coleman, 38, was convicted of killing Davontae Williams, the son of her domestic partner Marcella Williams.

END_OF_DOCUMENT_TOKEN_TO_BE_REPLACED

After dropping her lesbian anthem single titled “She” last month, R&B Diva Keyshia Cole released the album cover for her upcoming studio offering, Point of No Return. Keyshia, who insists she's divorcing her husband Daniel “Booby” Gibson, kicked off her “Point of No Return” tour in Rochester, NY, on July 12.

END_OF_DOCUMENT_TOKEN_TO_BE_REPLACED

The first ever black lesbian student-president of an expensive New Jersey prep school was forced to resign after she posted a series of offensive social media photos online mocking her white classmates.

Dean of Students Nancy Thomas accepted Maya Peterson's resignation. She told the Lawrenceville student paper that Peterson"s comments were "not fitting of a student leader."

END_OF_DOCUMENT_TOKEN_TO_BE_REPLACED

Djuan Trent, pictured right, came out of the closet in a blog post in response to her state's decision to not recognize out-of-state gay marriages.

"For a while, I struggled with the decision of whether or not it was necessary to 'come out,'" the 27-year-old natural beauty wrote in a post on her blog. "...I have realized that there is really no way for people to know that I disagree with their views or, even moreso, to know that they are talking about me, unless I actually open my mouth and say it. I am queer."

According to Yahoo news, Trent is the first publicly known lesbian contestant to have competed at a national level.

A federal judge ruled Kentucky's ban on recognizing same-sex marriages from other states was unconstitutional.

Gov. Steven L. Beshear of Kentucky said the state would hire outside lawyers to defend the state's same-sex marriage ban.

But Kentucky's Attorney General Jack Conway said he would not appeal the judge's ruling because "I would be defending discrimination. That I will not do."

Thanks to loyal reader R. Williams for the tip.

Last night's episode of VH1's Basketball Wives: LA was the standard fare of fake friends, fake lunch dates, and manufactured arguments. In addition to the familiar faces from the past 2 seasons, Jackie Christie, Draya Michele, and Malaysia Pargo, VH1 hired Brandi Maxiell, the wife of Jason Maxiell, Sundy Carter (Jackie's "new" friend), and Brittish Williams (the fiancee of Lorenzo Gordon who plays overseas) to add some spice into the script.

END_OF_DOCUMENT_TOKEN_TO_BE_REPLACED

A Georgia woman was taken to a hospital for treatment of injuries after she sat in glue on a toilet seat at a Home Depot. Emergency technicians were called in to remove the woman from the toilet seat. Afterwards, a store manager found a brown paper bag with a bottle of Loctite GO2 glue inside the bathroom. Almost immediately, skeptics accused the woman of glueing herself to the toilet seat in hopes of a big payday. Loctite GO2 glue is described as "construction grade super glue, usually only available online."

END_OF_DOCUMENT_TOKEN_TO_BE_REPLACED

She wrote about 3 of her female friends, women in their 40s, who confided in her that their "last resort for companionship" is with another woman.

Jada seems to be laying the groundwork for what many believe will be a personal revelation.

Mrs. Smith has been the subject of lesbian rumors for years. She has steadfastly denied the rumors. But today something changed.