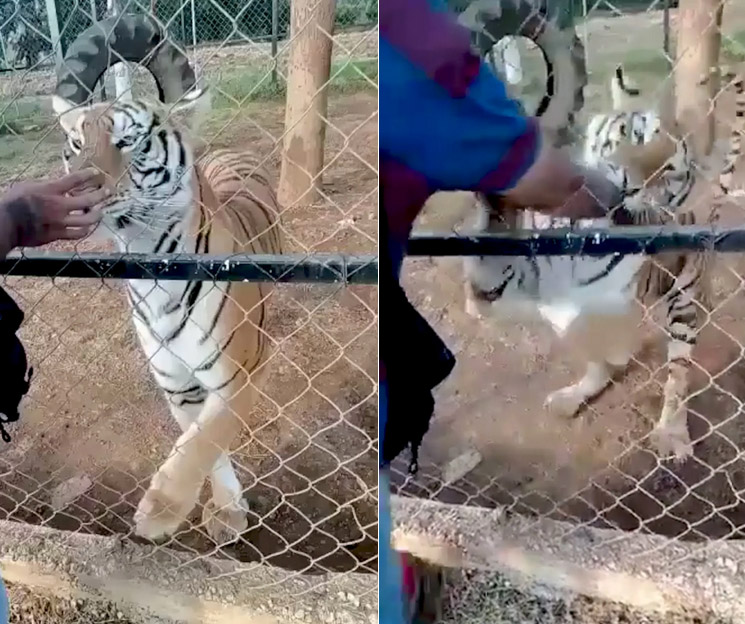 Mexican authorities arrested two people in connection with the grisly murders of a lesbian couple from El Paso, Texas.

Police arrested a 25-year-old man and 24-year-old woman and charged them with femicide. Their names were not released to the public.

Nohemi Martinez (left) and Yulizsa Ramirez (right), both 28, were killed while visiting family in Ciudad Juárez, according to reports.

Their body parts were stuffed in trash bags and scattered along a highway about 17 miles apart from each other in the neighborhoods of San Agustin and Jesus Carranza.

Authorities say Martinez and Ramirez, who were married in June 2021, were lured to a home in the town of San Isidro on Jan. 15.

Evidence shows they were tortured, shot and dismembered inside the home. Their body parts were discovered by police in garbage bags scattered along a highway in two towns, according to KSMS-TV.

The two women were parents to three children who are now orphans in El Paso, Texas.

Activists organized the March for Affective-Sexual Diversities in Ciudad Juárez and demanded justice for the "terrible and brutal crime of two lesbian women".

"It is a femicide and, surely, a hate crime due to lesbophobia, since it cannot be otherwise given the cruelty and viciousness with which they were murdered," the group said in a statement to El Diario.

However, Mexican authorities determined the murders were not hate crimes, according to the Washington Post.

The murders are "linked to the economic activity that both victims carried out and with the people they related to in that environment," the attorney general's office said in a statement to The Post.

An Atlanta man says he and his fiancée are being held captive in a Mexico hospital because they can't afford to pay his $14,000 medical bill.

Stephen Johnson was vacationing with his fiancée, Tori Austin, on a Carnival cruise ship headed to Cancun.

Two days into their trip, Johnson fell ill and was diagnosed with diabetes, and infection/inflammation of the pancreas and kidneys.

Ship doctors recommended Johnson seek emergency treatment at a hospital on the mainland. Johnson was rushed to a hospital where he was in intensive care for three days.

Because Johnson and Austin don't have insurance, the hospital demanded payment via cash or credit card on the spot.

Johnson is still too sick to be discharged, but hospital administrators told the couple that, if he is discharged, he can't leave the hospital until he pays.

Austin shared photos of Johnson in a hospital bed with Good American America. "We were physically assaulted by the administrative staff," Austin told GMA from her fiancé's hospital room. "They were physically pushing on him!" she added, before adding that hospital workers "locked the windows".

Austin told GMA that she offered to pay $7,000 in cash upfront and she was willing to work out a payment plan for the remainder of the bill.

Johnson told CBS46 that he is in "hell" and that he and Austin have no idea when they will be allowed to leave the premises.

They are pleading for help from the U.S Embassy and Consulates in Mexico.

Update: Tyler Perry has offered to pay the hospital bills for Stephen Johnson. According to Channel 2 Action News, Perry was watching Good Morning America on Friday morning and saw the couple's plight.

Channel 2's Justin Gray had been texting with the couple when he got a call from Perry offering to help. Johnson and his fiancée are on their way home to Sandy Springs, Ga.

The February 2017 cover features Melania, 46, sitting at a table pretending to eat a bowl of long strands of diamonds twisted around a fork like spaghetti.

END_OF_DOCUMENT_TOKEN_TO_BE_REPLACED

Donald Trump met with Mexican President Enrique Pena Nieto across the border in Mexico before delivering an epic speech on immigration in Phoenix, AZ on Wednesday.

Trump met with President Pena Nieto for 90 minutes during his historic trip to Mexico.

END_OF_DOCUMENT_TOKEN_TO_BE_REPLACED

There he will meet with President Enrique Pena Nieto and other top government officials before heading back over the border to Phoenix, AZ, where he will give his highly-anticipated speech on immigration.

END_OF_DOCUMENT_TOKEN_TO_BE_REPLACED

The massive manhunt for Mexican drug kingpin El Chapo is over. Joaquin "El Chapo" Guzman was reportedly captured by Mexican authorities on Friday.

END_OF_DOCUMENT_TOKEN_TO_BE_REPLACED

A Mexican hitman executed a female cashier in front of dozens of witnesses shopping for groceries at a crowded supermarket.

According to a police report obtained by LiveLeak.com, a lone gunman strolled into the supermarket at 10:50 p.m., shoved a bag boy aside and shot the 29-year old cashier in the face at point blank range. As the mortally wounded cashier lay dying on the floor the assassin pumped two more bullets into her body before casually walking away.

END_OF_DOCUMENT_TOKEN_TO_BE_REPLACED

Malcolm Shabazz, the troubled grandson of civil rights icon Malcolm X, has been killed in Mexico, the U.S. Embassy there confirms.

The Amsterdam News reports that Shabazz, 28, was thrown off a rooftop after being shot during an attempted robbery on Thursday, May 9.