Omarion was revealed as Yeti on "The Masked Singer" talent show on Wednesday night. In the post-reveal interview, he said he was unable to perform his signature "chest pop" because of his heavy Yeti costume, which weighed 60 lbs.

Omarion spoke to Billboard after the show about his experience.

The 36-year-old R&B star was one of two contestants voted off the TV talent show, hosted by Nick Cannon (right). New Kids on the Block singer Donnie Wahlberg was the other unmasked celebrity.

Omarion was thrilled to make history as the first singer to perform on the show in roller skates. He said the show made him feel validated as a performer.

"As long as I've had an audience, only through mediums like The Masked Singer do you actually get the opportunity to do things that can further your relationship with performing, and I felt like The Masked Singer was going to do that - and it did just that. Being in that suit and hearing the compliments from the judges and them not seeing me, that was dope." 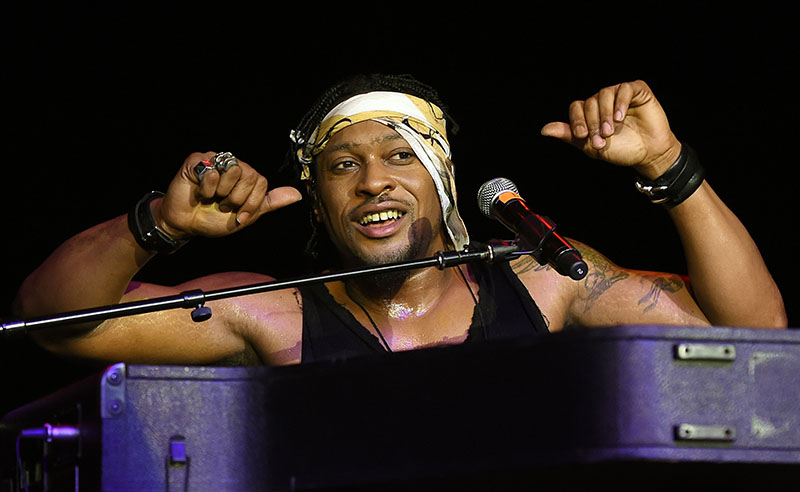 D'Angelo is the latest star to take part in the Verzuz livestream lip-sync series.

The R&B singer/songwriter announced he will take on his "friends" - rather than a single competitor - in the Verzuz battle on February 27 at The Apollo Theater in Harlem.

The 47-year-old Aquarius took to Instagram Live over the weekend to confirm his Verzuz appearance will precede a new album.

"D'Angelo KNEW we been patiently waiting for a new album and not only were getting that were also getting #VERZUZ I'm so grateful," one fan wrote on Twitter.

Another fan commented, "D’Angelo did an Instagram live confirming a new album and a Verzuz battle. I feel like this is a dream and I'm going to be p**sed when I wake up."

Music producers Timbaland and Swizz Beatz launchd their online lip-sync battles as a way to pass the time during the Covid-19 lockdowns last year.

The duo set up battles between stars including Snoop Dogg and DMX, Jill Scott and Erykah Badu, and Monica and Brandy.

D'Angelo toured briefly in 2015 after he released his last album Black Messiah in December 2014.

Kelly Rowland slammed a contestant on The Voice Australia for calling her "beautiful" during the Blind Auditions on Sunday night. The American singer is a judge on the popular TV talent show.

Kelly said the compliment from music teacher Ricky Muscat was "so degrading" and dismissive of her long, hard years in the music industry.

"George, I love you. Kelly, you're so beautiful," said Ricky. "The coach that I am choosing is George."

Ricky was then shown hugging the male judges while Kelly sat in her chair steaming. She then stood to embrace Ricky, but he ignored her.

Kelly's fellow judge Delta Goodrem sat next to Kelly to comfort her.

"It is the most frustrating s**t," Kelly fumed. "You know what's so frustrating? To be called beautiful... it's so degrading. It really pi**es me off," she raged. "Like 'oh, you're so cute', or 'you're so pretty'. I've been here (in the music industry) for 20-something years, you know what I mean?"

The 39-year-old mother-of-one insisted she was not upset at being passed over for Boy George, 58.

"I don't care who he (Ricky) would have chosen, it's just the fact that he chose George and goes 'you, you're a woman, you're pretty', that makes me upset. Oh, that irritates me to no end!"

However, George dismissed Kelly's pettiness: "I think Kelly's upset because he called her pretty. I love it when people call me pretty, please!"

Fans of the show point out that, before Ricky chose George, Kelly called Ricky "handsome". He may have been returning the compliment.

Question: If you were pushing 40, would you be outraged if a man called you beautiful?

Sean Combs was forced to cancel his appearance at a party on Friday night after he tripped and fell, suffering an injury to his quadriceps, the large muscle group in his thigh.

The injury was the perfect opportunity for the Instagram showman to garner sympathy for himself.

Just 24 hours earlier, Combs, 50, was the laughing stock of the Internet after Nipsey Hussle's widow, Lauren London, curved him on Instagram.com.

Combs was humiliated on Thursday, when he tried to start a rumor by posting and deleting a B&W photo of himself admiring Lauren London.

"I'm all love and peace but never forget....I'm a woman in grief and I don't play about Nip, my family , my character and code," London said.

She added: "Stop f*cking with me and my name. Now let me get back to healing.”

Combs took to Instagram on Friday to share various clips from his hospital bed as he prepared to go under the knife to repair the leg injury, telling fans he's "probably one of the most accident prone people in the world".

"Yes, I'm accident prone... I'm clumsy, I trip, I fall, I fall in holes. It's always been like that," he said in one video, where he listed his surgeries over the years.

"I've had two rotator cuffs, a knee replacement, and now it's on quad. At the end of the day this is God's work to slow me down and take better care of body and ya know, eat right and just stop treating my body like a machine," he said.

In one video, Combs, wearing a blue surgical cap and gown, promoted his upcoming talent competition reality show. He explained he's holding auditions for talented R&B singers. The first stop is in Atlanta next week.

To make sure the young ladies tune in to the show, the aging rapper enlisted the help of his handsome young sons - Justin, Quincy Brown, and Christian, to be judges on the show.