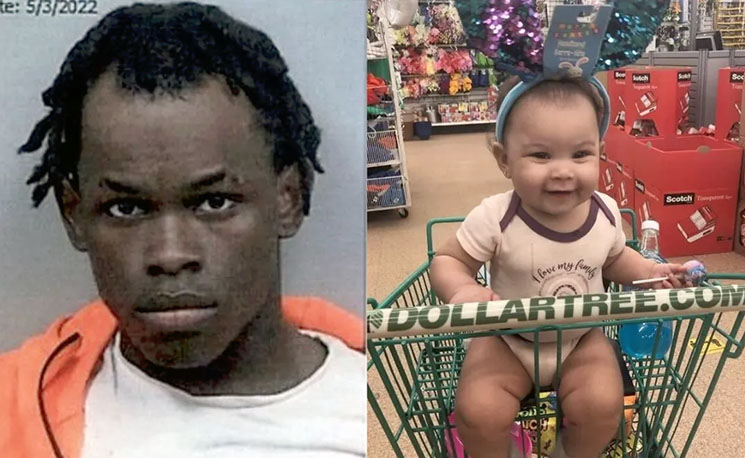 A man who was arrested on a probation violation in Snellville, Ga. never told jail officials that his 8-month-old daughter was in his car.

20-year-old Davied Japez McCorry Whatley is charged with second-degree murder after his daughter, Nova Grace Whatley-Trejo, died in the hot car on Tuesday.

FOX5 News reports Whatley entered the lobby of the police department to pick up a gun police had in their possession. Police ran a routine background check and learned he had an outstanding warrant for a parole violation.

Officials said Whatley was recorded the entire time he was in the lobby and he never told them he left his infant daughter in his car.

"I'm absolutely astounded someone could leave an 8-month-old in the car, park away from our building and walk up here knowing that child was in the car," Snellville Police Department Detective Jeff Manely said.

Nova was pronounced dead at a nearby hospital after her grandmother found her unresponsive in the car. Police say Nova was left alone in the vehicle for over 8 hours.

The grandmother said she spoke with Whatley in jail and he told her the child was in the car.

Whatley was released on bond for the probation violation, but he was arrested on Wednesday and charged with murder.

A 16-year-old rapper who shot and wounded an NYPD cop and posted bond using record deal money is back in jail for violating the terms of his probation.

New York City residents are breathing a sigh of relief now that Camrin Williams is back in custody.

Williams, who goes by the rap name C Blu, was arrested Jan. 18 after allegedly shooting and wounding a cop during a scuffle in the Bronx.

The aspiring rapper was also wounded by the same bullet that struck the officer. They were treated and released from a hospital.

The teenager was booked into the Crossroads Juvenile Center in Brooklyn after he was released from the hospital.

Williams allegedly used advance money from his recording deal with Interscope Records to pay the $250,000 bond.

At the time, his attorney Dawn Florio said, "Camrin has been released and will be back to his regular productive life of focusing on schoolwork and his music career.

However, Williams was back at the Crossroads Juvenile Center in Brooklyn on Thursday after violating his probation from a 2020 gun possession case.

"We're glad that a cop-shooter is back off the street, but this revolving door for a repeat gun offender makes no sense whatsoever," Police Benevolent Association President Pat Lynch said.

He added: "It should be clear to every New Yorker that our justice system is broken in many places. Our lawmakers need to prioritize fixing it above everything else."

Kodak Black has worked hard to improve his public image following his release from prison earlier this year. But the troubled rapper was dealt a setback when he violated the terms of his probation by failing a drug test.

The 24-year-old rapper, born Dieuson Octave in Florida, violated the terms of his supervised release in his federal gun case by failing a drug test, TMZ reports. And now Black is ordered to get treatment.

The rapper, who legally changed his name to Bill K. Kapri in 2018, was sentenced to 46 months behind bars in the gun case in late 2019.

However, he was released from prison by outgoing President Donald Trump when his sentence was commuted back in January.

Kodak was back in a courtroom hearing this week after violating the terms of his supervised release.

An Ohio man who kneeled on the neck of a crying 2-year-old baby boy in a viral photo was arrested and may be charged with child abuse.

Isaiah Jackson, 20, of Clark County, was arrested on a probation violation unrelated to the shocking incident.

Clark County officials are reviewing potential charges against Jackson, who is shown kneeling on a crying baby's neck in the photo.

The photo was a recreation of the image of former Minneapolis cop Derek Chauvin, who is white, kneeling on the neck of George Floyd.

The baby boy's arms are being held by someone off camera. It is not clear if the person restraining the child will also be arrested.

investigators made contact with Jackson, the child's mother and the child immediately after the photo went viral with the caption "Blm now mf."

The baby was evaluated at a local hospital but he was unharmed. The mother, who is dating Jackson, was not aware of the photo having been taken, or its contents, until she was informed by other parties after the photo went viral, according to WHIO.

The mother and baby are Caucasian, Jackson is mixed-race.

The baby's grandmother posted screenshots of text messages er daughter exchanged with a friend that show her defending Jackson's actions.

Lt. Shultz said the county prosecutor's office will "provide a determination of the scope and breadth of the felony charges" Jackson is likely to face.

Facebook is suspending the accounts of users who post the photo for violating the community's standards on hate speech and nudity.

END_OF_DOCUMENT_TOKEN_TO_BE_REPLACED

Soulja Boy is back behind bars after a judge ruled he violated the terms of his probation and remanded him immediately into custody.

END_OF_DOCUMENT_TOKEN_TO_BE_REPLACED

Tekashi 69 is a free man -- sort of. A New York judge who earlier sentenced rapper Tekashi 69 to four years probation in his child sex case has closed the case and credited him for time served.

END_OF_DOCUMENT_TOKEN_TO_BE_REPLACED

One of the first events ex-convict Meek Mill attended when he was released from prison was the Milano Di Rouge Fashion Show at One Liberty Place in Philadelphia on Saturday.

END_OF_DOCUMENT_TOKEN_TO_BE_REPLACED

Meek Mill's lawyer lashed out at the judge who sent his client to prison after she refused to step down from the case. Meek's lawyer Joe Tacopina called Judge Genece Brinkley "delusional" following the rapper's release from a Pennsylvania prison on Tuesday afternoon.

END_OF_DOCUMENT_TOKEN_TO_BE_REPLACED

CNN anchor Don Lemon made a pilgrimage to a Pennsylvania prison to visit Robert Rihmeek Williams, aka rapper Meek Mill, who is serving 2-4 years for violating the terms of his probation. Lemon, 52, visited Williams on Friday to put some money on his books in exchange for a call-in interview.

END_OF_DOCUMENT_TOKEN_TO_BE_REPLACED

It looks like rapper Meek Mill will serve out his full sentence behind bars after Judge Genece Brinkley once again denied his request for bail. Meek's chances for release on bail seemed high after evidence surfaced that his arresting officer in 2007 was suspected of corruption.

END_OF_DOCUMENT_TOKEN_TO_BE_REPLACED

The judge who sent rapper Meek Mill packing to prison has denied his bail request. The order comes one week after Pennsylvania's Superior Court sent Meek Mill's bail request back down to the lower court to be heard by the original sentencing judge.

END_OF_DOCUMENT_TOKEN_TO_BE_REPLACED

An appeal motion filed by rapper Meek Mill's attorneys in Pennsylvania's Superior Court was sent back to the lower court judge who sentenced the troubled rap star to prison for violating his probation.