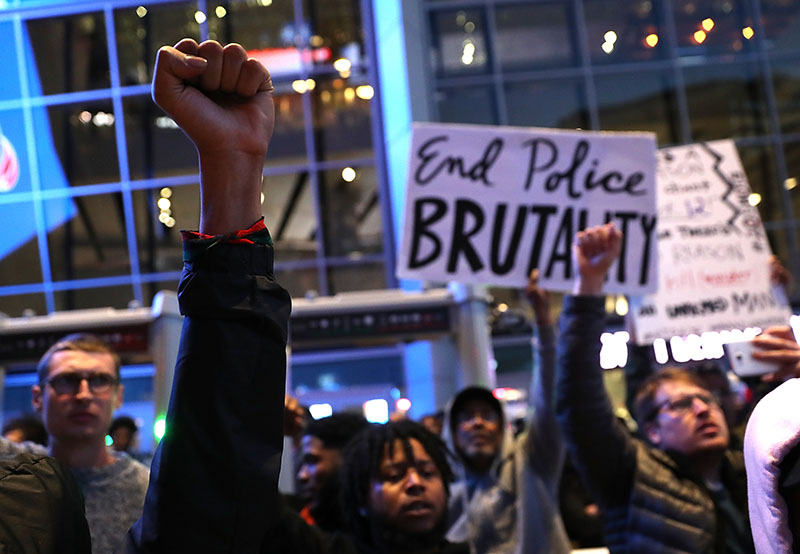 Sacramento police locked all entrances to the Golden 1 Center after demonstrators swarmed the arena to protest the police shooting of Stephon Clark, an unarmed black man.

Dozens of protesters surrounded the arena shouting “black lives matter,” and “join us or go home!” 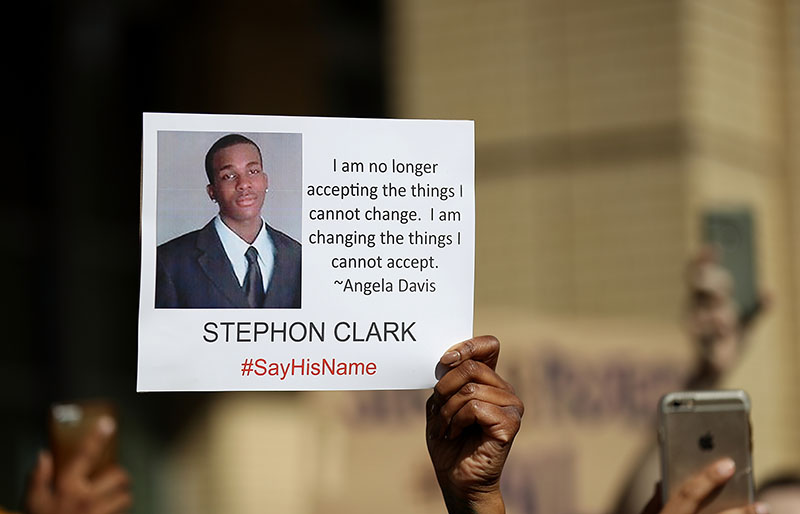 The Sacramento Kings played the Atlanta Hawks inside a nearly arena on Thursday night.

Protesters linked arms and refused to let ticket holders into the arena. One man was knocked out during a scuffle. There were no arrests. Only 2,000 ticket holders made it inside to watch the game.

Sacramento Kings owner and chairman Vivek Ranadivé addressed the protestors. “On Sunday we had a horrific, horrific tragedy in our community. We at the Kings recognize people’s ability to protest peacefully and we respect that,” he said.

According to the Sacramento Bee, Clark, a 22-year-old father-of-2, was shot multiple times in his grandmother’s backyard after police mistook his cell phone for a gun.

According to reports, 2 officers responded to a 911 call of “break-ins” on 29th Street on Sunday night.

A Sacramento County Sheriff’s Department helicopter pilot radioed to cops on the ground that the suspect was seen running and hopping a fence into a backyard.

That backyard belonged Clark’s grandmother’s house. When the 2 officers arrived in the backyard they ordered Clark to show his hands.

According to an officer’s body cam, a cop shouted “gun!” and both officers fired 10 times each, killing Clark.

Clark’s grandmother, Sequita Thompson, said she told family members to knock on a back window for entrance through the garage door.

The Department refused to explain why the officers muted their bodycam mics after the shooting.

On Wednesday, Sgt. Vance Chandler said the officers followed the orders of a third officer who arrived at the scene. Chandler said there were “a variety of reasons why officers have the opportunity to mute their body worn cameras.” He directed a Sacramento Bee reporter to go to the department’s website to review the general orders.

The homeowner who called 911 to report a suspect breaking into his truck and smashing a neighbor’s sliding glass door, described the suspect as 6-foot-tall and wearing a black hoodie and pants with a white stripe or dots.

“I heard the noise and I came outside and he was standing right along the side of my truck and I grabbed my ball bat out,” the caller told a dispatcher.

The homeowner said he chased the suspect after he caught the man breaking into his truck.

The Sacramento Police Department refused to identify the two officers, but a prominent civil rights attorney identified them as Terrence Mercado and Jared Robinet.

#PressPlay The Kings owner Vivek Ranadivé addressed the crowd after protests over the police shooting of unarmed Stephon Clark in his own grandmother’s backyard delayed the start of the Hawks-Kings game. ??(Swipe Left)

Stars Jones Ties the Knot for the 2nd Time