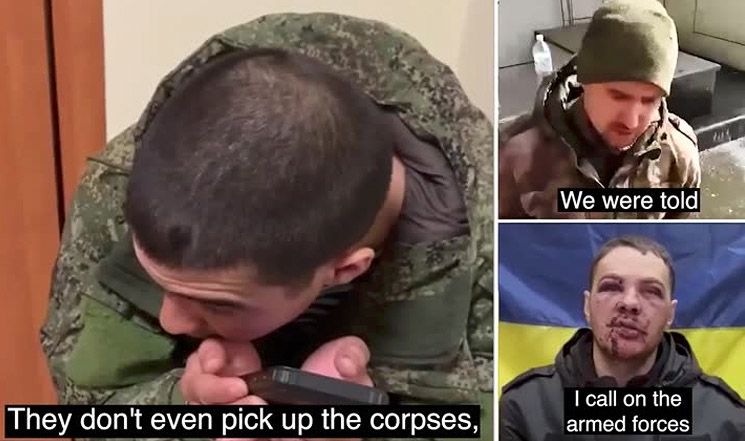 In footage released by Ukraine officials, weeping prisoners of war (POWs) said they had no idea they were being sent to war. They claimed they were unprepared and had no food by the time they were captured.

Crying soldiers said they didn't know they were going to attack "peaceful people defending their territory."

They also said Russian officials didn't pick up the corpses of their fellow soldiers.

Russian President Vladimir Putin is reportedly humiliated that Ukraine didn't fall in a few days. He thought the invasion would be over by now. Instead, he has lost over 5,840 soldiers - the biggest losses since World War 2.

According to reports, Putin invaded Ukraine to prevent President Volodymyr Zelensky from joining NATO. If Ukraine joins NATO, then other NATO countries - including the United States - can position their missile systems directly on the Russian border.

That's what Putin fears the most — and why he is willing to start World War 3.

As it stands now, the closest the U.S. and her allies can get to Russia is Poland, which borders Ukraine's west coast.

Ukraine authorities have forbidden men aged between 18 and 60 from leaving and ordered them to stay and fight Russian invaders.

Joe Biden called Putin a "dictator" in his annual State of the Union address on Tuesday, as he banned Russian aircraft from U.S. airspace.

The U.S. president imposed more sanctions on Russia. Additionally, the U.S., European Union and the U.K. removed 7 Russian banks from the SWIFT international payment system. Removal from SWIFT is a huge blow to the Russian economy.

Biden didn't mention if he plans to stop paying Russia $75 million per day for oil.