Singer Kelis was hopping mad after she heard a track off Beyonce‘s new album Renaissance. The album leaked in Europe 2 days before the official release date of midnight on Friday.

Kelis hopped in the comments on her fan page under the username @bountyandfull and expressed her annoyance that one of the tracks, “Energy” samples her hit single “Get Along With You,” which The Neptunes produced for her 1999 debut album.

Kelis was irate that no one contacted her to clear the sample.

“The level of disrespect and utter ignorance of all 3 parties involved is astounding,” she wrote. “I heard about this same way everyone else did. Nothing is ever as it seems, some of the people in this business have no soul or integrity and they have everyone fooled.” 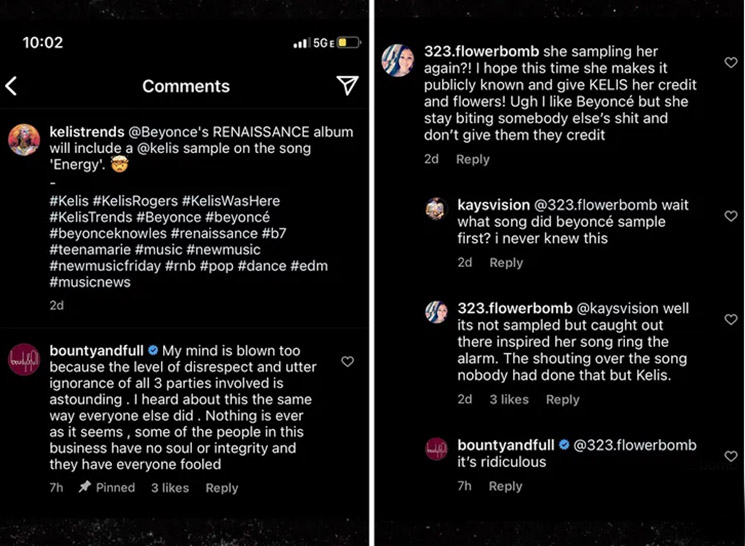 Kelis’ comments – which have since been deleted – set off a shouting match between her loyal fans and Beyonce’s BeyHive on Twitter.

Beyonce’s fanatics say Kelis doesn’t own her masters, so she has no say in clearing samples.

Kelis realized she was in the wrong and deleted her comments and y’all still going https://t.co/ZhZI8Dsb0w

This isn’t the first (or last) time Beyonce has been accused of thievery. Her petty thefts over the years are legendary.

Meanwhile, an employee at Beyonce’s Parkwood Entertainment got a French grocery store shut down for selling her bootleg CDs.

she actually kept it in the wrapper—doesn’t have a CD player w her—but an employee of Beyoncé’s label got in touch to find out which store and shut it down: "to make sure he wasn’t some other stan I asked him to prove that he worked for Parkwood…" ? pic.twitter.com/Mkc6SeCohA

Man asks ‘Am I missing out on Good Black Women because I dislike weaves?’