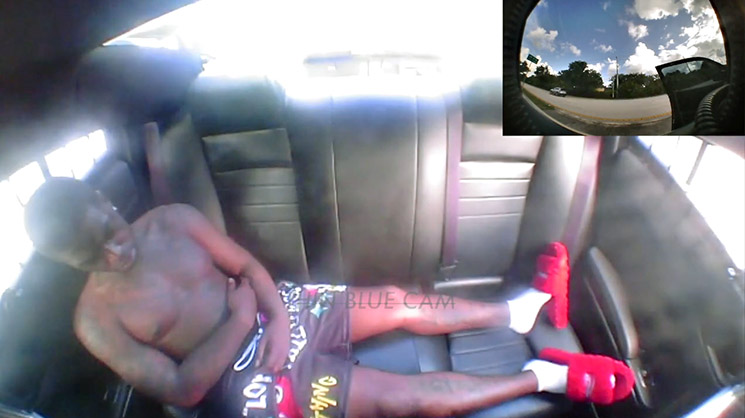 The over 2 hour footage taken from several cameras inside a police cruiser show a shirtless Kodak Black stepping out of his Dodge Durango SUV and speaking with several officers.

Black told the cops he was in Detroit for 3 weeks and he welcomed a newborn daughter that weekend.

Police said he was pulled over for driving with an expired tag and dark window tint. His driver license was also suspended.

One officer said he smelled weed inside the vehicle and that gave him probably cause to search inside.

"My sh-t ain't smell like weed. I don't smoke weed. I ain't smoke nothing, you feel me? He didn't smell marijuana."

Police searched the car and found 31 oxycodone pills and $74,960 cash.

Black grew increasingly frustrated as police on the scene waited for a supervisor to arrive to decide what to do with the money.

Police allowed Black's mother to speak to him, and she broke down in tears.

"You know better," she told her son. She reminded him that he has two babies to take care of. "Chill, mom, chill," he told her.

"If you not out [of jail] today I'm gonna kill myself, I swear to God!" she cried.

Black slumped his shoulders and looked defeated as his mother wailed.

Black posted bond later that day. A week later, he accused police of racial profiling him and threatened to sue.

A magistrate judge placed him on house arrest and ordered him to pay a $225,000 surety bond, submit to random drug testing, wear a GPS ankle monitor and get permission to perform in concert.