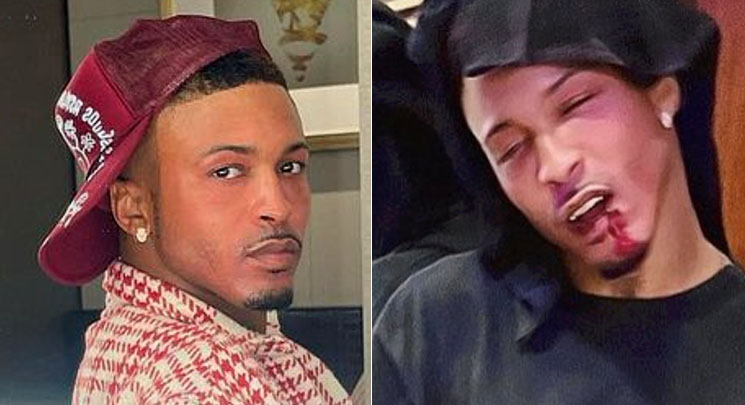 August Alsina claims he was sucker punched by troubled rapper Tory Lanez at a nightclub over the weekend.

According to Instagram blogger Fee of Got City Tea, the two hip-hop artists already had beef because Tory commented on August's past affair with married actress Jada Pinkett Smith.

August seemed to confirm the rumors when he posted an image of his bloody lip on Instagram. He called Tory a "4'11 sized leprechaun".

"As I'm exiting the building after the show last night, a 4'11 sized leprechaun ran down on me w/ 8 oversized security ni--as, who I greeted each individually upon their walk up as they tried to press me. Whole time, I'm one deep, No security [sic]."

"Tory continues to ask w/ a broken ego why I didn't dap him up, I go on to tell him.. I was a fan of him and didn't understand him speaking on my business publicly In the past, because I don't know him or ever met him until last night. So when he spoke it caught me off guard because of his past actions, i assumed he didn't like me, that's all [sic]."

He continued: "There was never a 'fight'! Simply an Assault. Dude has no real friends, an is on a crash out mission [sic]."

When his followers said the first image was heavily Photoshopped, August posted a follow-up image of his alleged injury. He called the assault "a toupee'd sneak attack".

"Nothing happened," he told Instagram blogger DJ Akademiks on Sunday. "I don't even know what this kid is talking about."

Tory is already out on bond for shooting rapper Megan Thee Stallion in both feet.