Were you fooled by the guy who claimed he was blocked on Facebook because of his name, "Phuc Dat Bich"?

I mean, come on. How could you fall for that one?

He said his hoax taught him not to trust the news media who gets most of their stories from social media nowadays.

He wrote: "It goes to show that an average joe like myself can con the the biggest news sources with ease."

END_OF_DOCUMENT_TOKEN_TO_BE_REPLACED

The son of 1980s R&B singer Miki Howard claims to be the illegitimate son of pop icon Michael Jackson. Brandon Howard, 31, will release DNA evidence today "proving" he is Michael's son on a website that is affiliated with gossip blog TMZ.com. By coincidence, this bizarre report originated on TMZ. But other, more credible media outlets are picking up the story as if it is a fact.

Brandon, a struggling R&B singer, claims to have culled Michael's DNA from a dental device. He claims the DNA proves he is Michael's son.

END_OF_DOCUMENT_TOKEN_TO_BE_REPLACED

Earlier this week, Beyonce's frenzied Stans praised her for making a young fan's entire life by photobombing her "selfie" during a live concert in Australia. Almost immediately after a video GIF and photos of the alleged photobomb went viral online, critics and bloggers voiced doubts that the photobomb was genuine.

One blogger even pointed out the timing of the shot and how no one -- not even Beyonce -- could posed for a photo in 2 seconds while in mid-yodel.

END_OF_DOCUMENT_TOKEN_TO_BE_REPLACED

Just days after skeptics began questioning if reality TV star Kim Kardashian was even pregnant with bestie Kanye West's baby, she shows up out of the blue with a muffin top hanging over her leggings.

Does she really think we can't tell the difference between belly fat and a baby bump?

END_OF_DOCUMENT_TOKEN_TO_BE_REPLACED

In the audio, Tuiasosopo (picture inset) is pretending to be Manti Te'o's girlfriend, Lennay Kekua -- 2 days before she supposedly "died" of leukemia.

If you haven't been following this bizarre story, click here.

The NY Daily News reported this morning that Tuiasosopo's attorney admitted his client "disguised his voice" as a woman in order to fool Te'o for 3 years.

END_OF_DOCUMENT_TOKEN_TO_BE_REPLACED

Former Notre Dame linebacker Manti Te'o told Katie Couric he "briefly" lied about his dead girlfriend even after he learned she didn't exist.

But his girlfriend, Lennay Kekua, did not exist. It was all a hoax.

Katie Couric's full interview with Te'o will air on Thursday (check your local listings for the station and time). It should be noted that both Couric and Te'o have the same agent.

END_OF_DOCUMENT_TOKEN_TO_BE_REPLACED

Yesterday, the media and blogs came together in orgasmic praise for Beyonce's rendition of the Star Spangled Banner. Some of the tone deaf listeners even compared Beyonce's version to the best rendition of the National Anthem ever: sang by the late Whitney Houston.

END_OF_DOCUMENT_TOKEN_TO_BE_REPLACED

A former Notre Dame football star whose story of triumph over tragedy inspired millions was exposed as a fraud Wednesday. Manti Te'o, the runner up for the Heisman trophy, told the media his girlfriend, Lennay Kekua, 22, and his grandmother died within hours of each other in September.

"I miss 'em, but I know that I'll see them again one day," he told ESPN before Notre Dame was blown out by Alabama in the college football’s BCS National Championship in Miami on January 7.

The gifted linebacker became the face of the BCS title game as he spun his web of lies about Kekua. He made national headlines when he said his "girlfriend" suffered serious injuries in a car crash a month before she died of leukemia in Hawaii.

The national media -- and in particular, the sports networks, tripped over themselves in their rush to uplift Te'o as a symbol of hope over adversity, or whatever.

END_OF_DOCUMENT_TOKEN_TO_BE_REPLACED

UPDATE: The sleuths over at Gawker.com debunked the viral video of an eagle snatching a baby. The baby is a rag doll and the bird is not even an eagle, it's a falcon.

"'A golden eagle tries to snatch a baby in Montreal,' and the video goes viral. But it's faked. Golden Eagle is a scarce visitor in the Montreal area, but the bird in the video is not a Golden Eagle, nor anything else that occurs in the wild in North America. This was clearly a setup: using a falconer's bird, and probably a fake toddler for the distant scene. With all the ignorance about nature that's out there already, the last thing we need is this kind of stupid garbage."

END_OF_DOCUMENT_TOKEN_TO_BE_REPLACED

I hate to say I told you so... According to published reports, Evelyn Lozada filed for divorce from troubled NFL star Chad Johnson. Lozada and Johnson tied the knot on July 4 in St. Martin.

It was obvious from the start that Lozada would find a way to end the fraudulent marriage to Johnson. Most women marry for love. Evelyn Lozada married for fame and money.

Whether Johnson, 34, was in on the scheme to defraud the public is unknown. There is the possibility that Lozada, 42, fooled Johnson -- just like she fooled the public -- before her scheming literally blew up in her face.

END_OF_DOCUMENT_TOKEN_TO_BE_REPLACED

I can't stop laughing at these two fools! They will do anything to promote their wack reality show.

Evelyn Lozada, one of the stars of VH1's "Basketball Wives."

Johnson allegedly head-butted Lozada during an argument, says the South Florida Sun-Sentinel, and when cops arrived to the scene, Lozada had lacerations on her forehead.

Our sources say Lozada has been at the hospital for several house and her injury required stitches.

According to our sources, the fight started when Lozada found a receipt for condoms in the center of the couple's Maserati and confronted Johnson about it. A verbal argument ensued.

We're told at some point during the argument, Johnson head-butted Lozada. According to reports, Johnson told police he butted heads with Lozada by accident.

Johnson is reportedly still in custody and wil have to go before a judge before he can be released.

Johnson and Lozada were married last month in Miami after Johnson proposed in November 2010 with a massive 10-carat diamond ring.

Didn't I tell you that Basketball Wives cast member Jennifer Williams would drop her fake "bitch slap" lawsuit against Nia Crooks when the season ended? VH1 and Bravo will continue to produce degrading "reality" shows as long as their gullible viewers continue watching.

Unconfirmed rumors suggest Jennifer Williams was not being asked back for another season of Basketball Wives after she filed a lawsuit against Evelyn Lozada's assistant, Nia Crooks, for slapping her face during an episode of the show [click here if you missed that].

Now, after a rough summer of having her Bentley repossessed and her estranged husband Eric's secret baby put on blast, Jennifer decided she's just had enough and has dropped the suit without settlement. 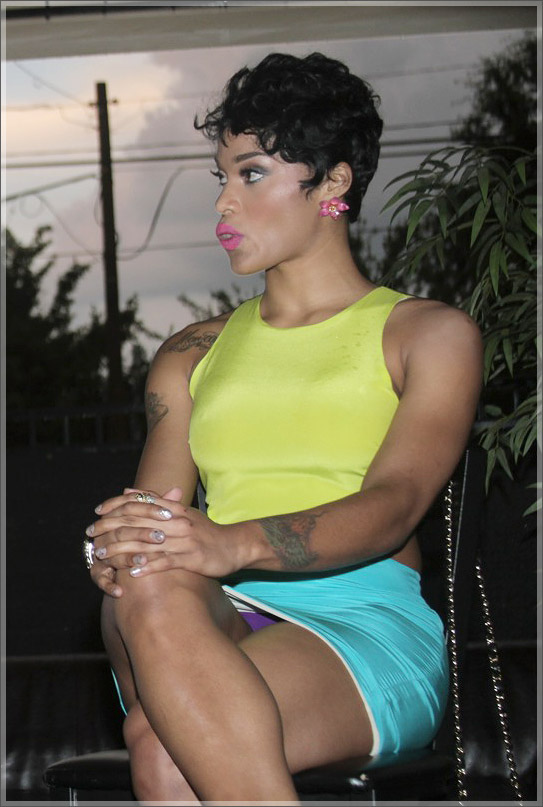 A loyal reader who begged to remain anonymous writes:

Hi sandra,
I have solid proof that "Joseline Hernandez" of 'Love Hip Hop Atlanta' was born a man. "Joe" and I went to the same high school. Attached is a photo scan of his HS yearbook picture before the surgeries. (Please don't publish his pic!) I was close to him in high school. Here is my contact info. Let's talk. [Contact info removed]