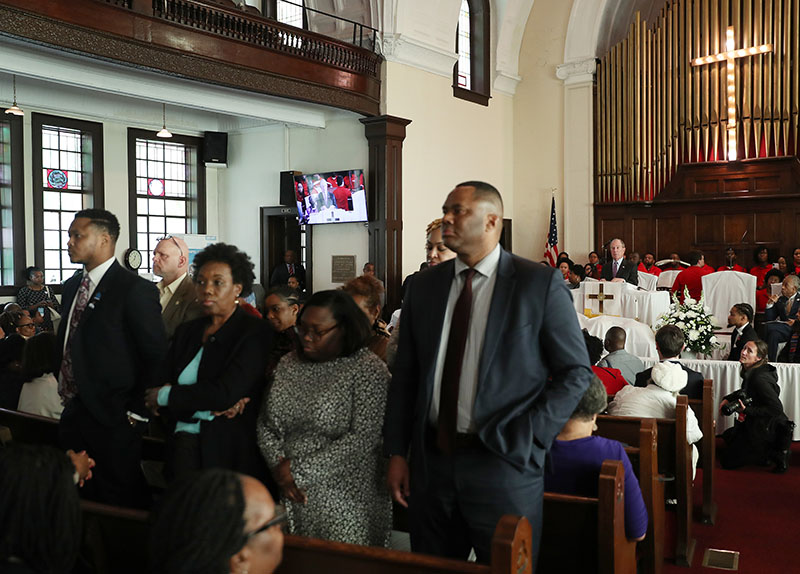 As Mike Bloomberg stepped up to the pulpit to speak at the historic Brown Chapel in Selma, Alabama, on Sunday, a handful of congregants silently stood and turned their backs to him.

Political and civil rights leaders spoke at the church to mark the 55th anniversary of "Bloody Sunday," when civil rights activists were brutally beaten by Alabama State Troopers during a march across Edmund Pettus Bridge.

Failed gubernatorial candidate Stacey Abrams sat behind Bloomberg as he spoke. She didn't bat an eyelash during the silent protest. 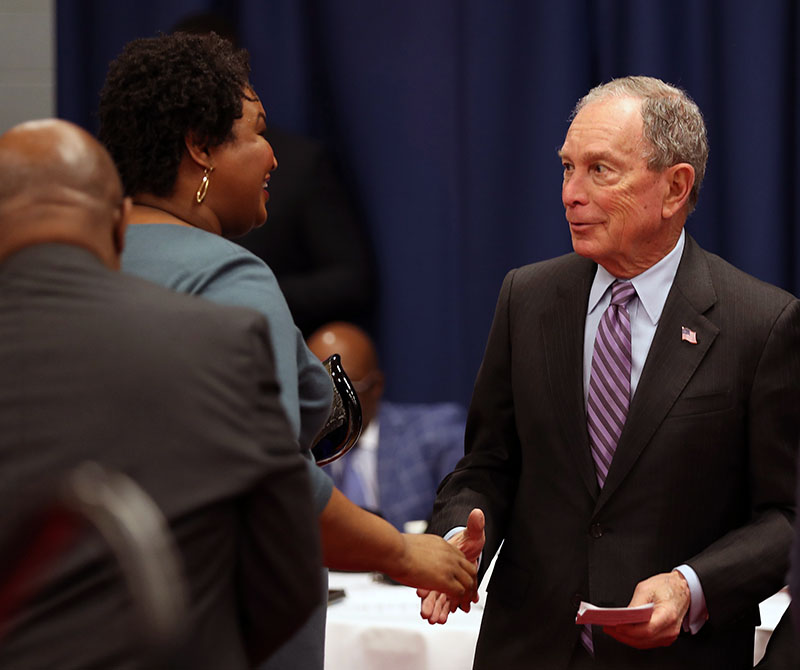 Before the service, Abrams, 46, shook hands with Bloomberg, who donated $5 million to her nonprofit voter suppression organization Fair Fight in Atlanta.

Pastor Leodis Strong applauded the former New York City mayor for even showing his face at the church in Selma.

"It shows a willingness on his part to change," said Strong.

The silent protest was in part due to Bloomberg's support of NY's controversial stop-and-frisk policy.

Bloomberg, 77, apologized in November for assigning more cops to minority areas "because that's where all the crime is."

Bloomberg apologized in January for ordering police to throw young Black males "up against the wall and frisk them."

And he apologized in February for saying Black and Hispanic males don't follow instructions at work.

One of the people who turned their backs to Bloomberg was Ryan Haygood, president and chief executive of the New Jersey Institute for Social Justice.

As he stood with his back turned, Haygood thought about the police brutality civil rights organizers faced in the church 55 years ago as they protested for equal voting rights.

"I thought this could be the place where he could finally say, once and for all, 'Let me own what I did, let me atone for it.' He didn't even touch it which is more disrespectful," Haygood said.

Joe Biden, fresh off his decisive win at the South Carolina primary on Saturday, also spoke at the annual "Bloody Sunday" service.

78-year-old Biden, who has his own racist past to contend with, playfully suggested that Abrams might be vice president someday.

Abrams closed the four-hour service with a speech about her ongoing efforts to register every Black person to vote for Democrats through her Fair Fight 2020 campaign.

Thanks to fat checks from donors like Bloomberg, her Fair Fight campaign has amassed $25 million in the bank. 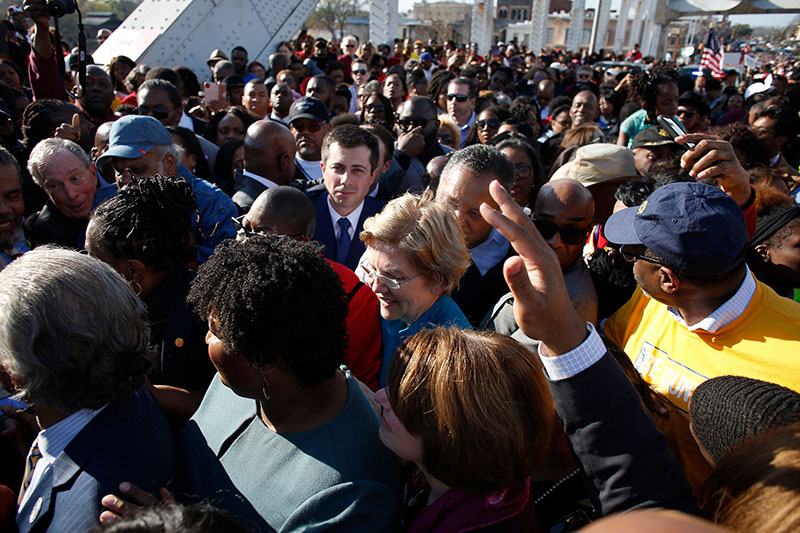 Buttigieg, 38, who dropped out of the presidential race on Sunday, promised to help make sure a Democrat wins the White House in November.

END_OF_DOCUMENT_TOKEN_TO_BE_REPLACED

Rev. Al Sharpton's half-brother is under arrest for capital murder in the shooting death of an Alabama woman. Pastor Kenneth Glasgow was arrested the day after he spoke at a March for Our Lives rally on Saturday.

END_OF_DOCUMENT_TOKEN_TO_BE_REPLACED

Senate candidate Doug Jones admits his campaign sent out racist campaign fliers to black constituents in Alabama. The mailer was intended to motivate black people to vote for Jones rather than his opponent Roy Moore, whose campaign was nearly upended by sexual harassment allegations.

The mailer, which was designed to resemble an Internet meme, featured the text: “Think if a Black man went after high school girls anyone would try to make him a senator?” Under that is a photo of a young black man with a skeptical look on his face.

END_OF_DOCUMENT_TOKEN_TO_BE_REPLACED

An Atlanta rapper and his cousin who went missing 2 weeks ago have been found dead in Alabama.

The bodies of Edward Reeves, aka Bambino Gold, left, and his cousin Kendrick Stokes were found in a wooded area in Macon County, Alabama, according to the Atlanta Journal Constitution.

END_OF_DOCUMENT_TOKEN_TO_BE_REPLACED

A cop killer raised both middle fingers as he was put to death Thursday by lethal injection in Alabama. Torrey Twane McNabb, 40, was just 20 years old when he shot and killed Montgomery police officer Anderson Gordon in 1997.

END_OF_DOCUMENT_TOKEN_TO_BE_REPLACED

Alabama police arrested a career criminal in connection with the armed robbery and kidnapping of an Alabama nursing student who made a daring escape from her car trunk.

END_OF_DOCUMENT_TOKEN_TO_BE_REPLACED

An Alabama woman made a daring escape from her own car trunk after a kidnapper robbed her and took her at gunpoint.

The incident occurred in the Avondale neighborhood of Birmingham, Alabama around 10:30 p.m. Tuesday.

END_OF_DOCUMENT_TOKEN_TO_BE_REPLACED

A fifth-grade teacher has been arrested and charged with shooting and wounding his teenage daughter's boyfriend.