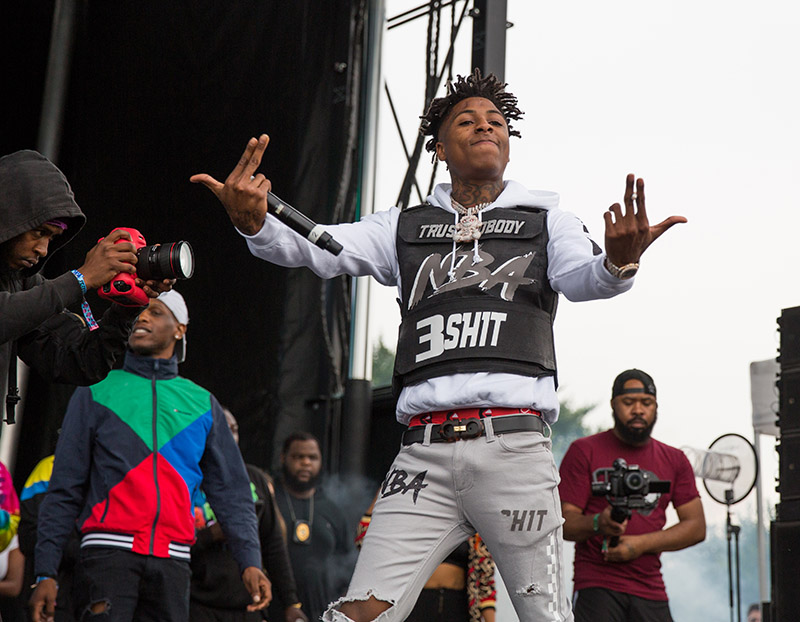 2 people were killed, including a rapper, and four more wounded during shootouts at the Rolling Loud Music Festival in Miami Gardens, Florida over the weekend.

Police are still investigating other incidents of violence and mayhem at the three-day music festival. Rolling loud is slang for rolling ground up marijuana.

Rappers Kodak Black, 21, and NBA Youngboy, 19, were arrested, as well as NBA player, Phoenix Suns forward Josh Jackson, 22, who refused to leave a VIP area at a nightclub. He was released on $1,000 bond.

Prior to Youngboy's arrest, he was targeted by three gunmen in a passing GMC Yukon who opened fire on his Cadillac Escalade outside the Trump International Beach Resort in Sunny Isles Beach, Florida on Mother's Day.

The rapper wasn't injured, but his 19-year-old girlfriend, Kaylyn Marie Long, was shot. She was transported to a hospital with a non life-threatening injury.

Youngboy's bodyguards, who were legally armed, returned fire. One of those bullets fatally struck 43-year-old Hertz Rent-a-Car employee Mohammad Jradi, who was sitting in his van across the street.

A 5-year-old boy was grazed by a bullet. He was treated and released by paramedics at the scene.

The rapper's bodyguards chased and tackled two of the suspects, who were taken into custody by police. Youngboy, whose real name is Kentrell DeSean Gaulden, performed during Sunday's festival lineup.

About 36 hours earlier, police say up-and-coming Chicago-Based rapper AAB Hellabandz was fatally shot outside the Cameo nightclub on Miami Beach. Police surveillance video showed people running and ducking behind cars as vehicles burned rubber out of the parking lot. Amid the chaos, the gunman jogged away.

Police say none of the shootings over the weekend were connected.

Miami Beach police spokesman Ernesto Rodriguez said the 24-year-old rapper, who was born Ameer Golston, was not on the list of performers at Rolling Loud. He was wanted in Atlanta for attempted murder and armed robbery.

Golston is not believed to be involved in the attempted murder of Migos rapper Offset, who was inside a rehearsal studio that was riddled with bullets during a drive-by shooting last week. Offset and the Migos opened up for his wife, rapper Cardi B at Rolling Loud on Friday night.

Police don't think there's a connection between Golston's murder, the NBA Youngboy shooting or an incident involving two tour busses hired by a festival performer. No one was injured on the two buses when a passing car opened fire on Interstate 95 on Friday morning.

"It's all something we are investigating, but it is too early to tell" what ties, if any, exist, Rodriguez said.

Meanwhile, Rolling Loud organizers were unapologetic for their violence-marred festival. The festival's official Twitter account posted a message on Monday: "IF YOU DIDN’T ENJOY ROLLING LOUD DESPITE THE HICCUPS, STAY HOME NEXT YEAR...THIS IS HIP-HOP."