19 violent gang members were taken off the streets of Bed-Stuy, Brooklyn this week as federal authorities unveiled two indictments Wednesday.

According to Patch.com, 19 members of the notorious 900 street gang were arrested and charged with at least 13 shootings and other acts of violence, including 2 murders.

"I'm confident this takedown of these gang members will make a difference to the people of Brooklyn, especially people who live in the Bedford-Stuyvesant area and Crown Heights," Gonazalez said at a press conference. "Many of these defendants were charged with multiple acts of violence and shootings, so there's a multiplying impact toward peace when they are taken off the streets."

Washington, a member of the rival Hoolie gang, ran a stolen credit car ring and believed he was meeting a girl to join the scheme.

He was shot before he could exit a cab on Dean Street in June, prosecutors say. According to the indictment, members of the 900 gang "catfished" Washington by posing as a girl on Instagram.

Williams and 21-year-old Wydeem Rudd are also charged in the fatal shooting of Felder, whom Rudd and Williams incorrectly blamed for the shooting of a 900 gang member.

Felder was shot six times, including once in the head, on Sept. 28.

Chicago rapper King Von was reportedly killed during a shootout in Atlanta. He was 26.

11Alive's Jerry Carnes said an argument inside the club lead to gunfire between two groups.

Two men were killed at the scene and Bennett and one other man were wounded in the shootout and transported to a hospital. Bennett was later pronounced dead.

An argument at a club on Trinity Avenue lead to gunfire between two groups. Two APD officers got involved. Two men are dead. Officers are ok. GBI investigating. pic.twitter.com/mdS69KdntL

Two off-duty Atlanta Police officers who were moonlighting as club security were involved in the shooting. No police were injured.

In May 2014, Bennett, who was affiliated with a Chicago street gang, was charged with murder for fatally shooting a man and wounding two others during a birthday party in the Englewood neighborhood.

Bennett served prison time and was released on good behavior.

Bennett is also linked to the murders of Chicago gang bangers Gakirah Barnes in 2014 and Joseph "JoJo" Coleman in 2012.

Waka Flocka Flame asked his Instagram followers to keep the same energy for gang bangers as they do protesting police who shoot petty criminals.

The 34-year-old Atlanta-based rapper posted a series of thought-provoking memes on his IG page that revealed his conservative ideologies.

In one meme Waka wrote: "How can we as a community beg the police to don't shoot but we killing each other still? We gotta ask ourself how bad do we want true freedom?"

According to the Washington Post's database on police shootings, 13 unarmed Black men were killed by police in 2019. While hundreds of Black men, women and children have died as a result of gun violence in the U.S. since 2019.

Waka suggested that Marxist organizations use anti-police protests to distract Black people from the very serious problems that plague our community.

In another meme Waka wrote: "I guarantee you if all the hoods in America seen eye to eye police a shit on they-self!!! [sic] Nobody can f-ck with us unified."

In a third post, he wrote: "[How] can we love our gangs more than our Forefathers and Ancestors??? And not understand the reason why they fought for freedom?"

Cardi B's alleged attack on two sisters who were bartenders at Angels Strip Club in Queens, New York in 2018 was orchestrated by her bestie Star Brim, feds say.

Feds reportedly gave Brim, who is 9 months pregnant, one month to turn herself in after giving birth. The baby is due this month (Feb).

The first-time mom proudly posed with her baby daddy, an alleged Crips gang member, at her baby shower last month.

Brim captioned an Instagram image: "THE PARENTS... HAVEN'T PARTIED FOR 8 MONTHS HAD TO TURN UP".

Also attending the baby shower was her bestie Cardi B, actress LaLa Anthony, and rapper Pop Smoke, who was killed in a home invasion early Wednesday in California.

According to the New York Post's gossip column Page Six, the rapper's best friend ordered the 5-9 Brims gang members to target two sisters and deliver a savage beatdown without killing them.

Prosecutors unsealed federal indictments against the "Bodak Yellow" rapper's alleged "muscle" Jeffrey Bush, 35, and her close pal Brim, 28, on racketeering conspiracy charges for their alleged involvement with the 5-9 Brims, a chapter of the notorious Bloods gang. 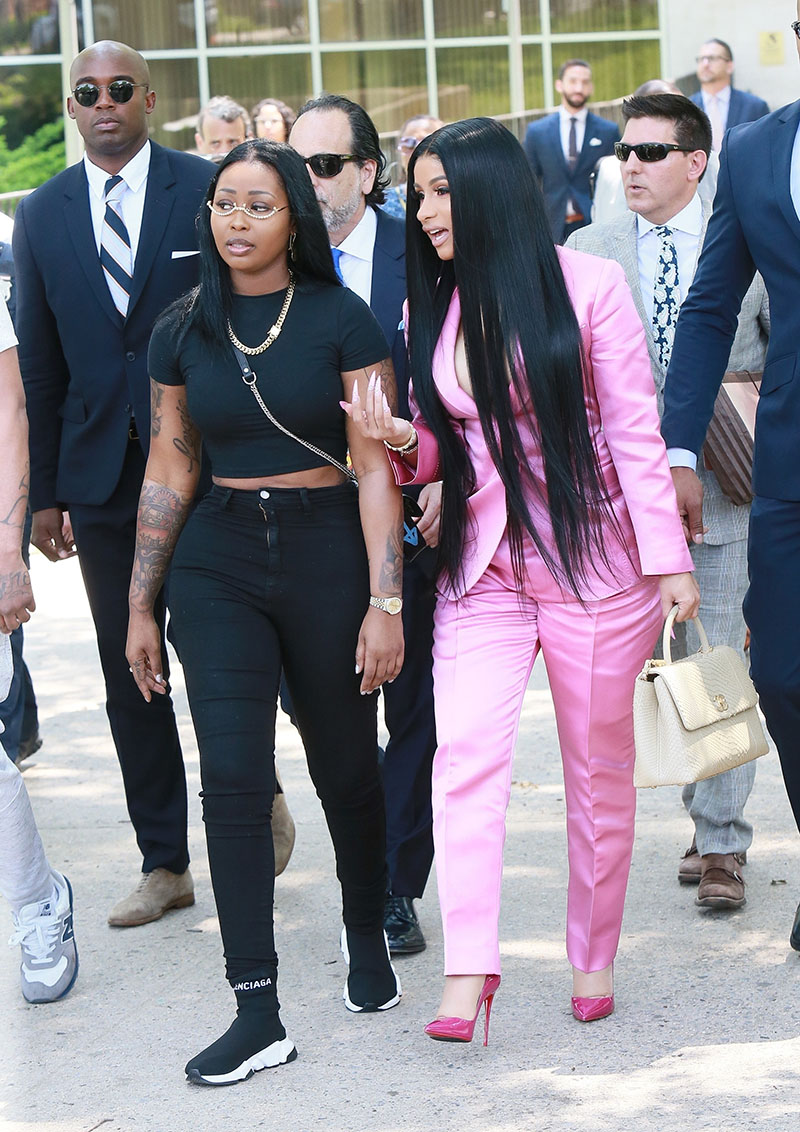 Brim, who is allegedly the gangs' 'godmother' or highest-ranking female member, apparently ordered a beatdown on the sisters for showing disrespect to Cardi, prosecutors allege.

One of the sisters was accused of sleeping with Cardi's promiscuous husband, rapper Offset of Migos. Brim (left) and Cardi are pictured at a Queens, NY courthouse, where Cardi faces trial on assault charges.

"I want hands put on them. I don't even want no talking," Brim ordered the gang, according to court papers.

Bush and three other female gang members then arrived at the Angels strip club on August 15, where they grabbed one of the bartenders by the hair, dragged her across the bar and punched her in the head.

Bush recorded the entire incident on his cell phone and sent the footage to Brim, who was doing time in prison for assault.

"Dissatisfied with the first attack, defendant Respass continued communicating with other enterprise members about the assault, and discussed whether the assault was vicious enough or if 5-9 Brims needed to attack the victim again," a detention memo alleges.

Bush and Cardi B, real name Belcalis Almanzar, still have assault charges pending against them in Queens Supreme Court for the second incident. Cardi, who was present but did not participate in the assaults, has pleaded not guilty on the assault charges.

A Houston rapper was arrested on charges of running a violent street gang. Police arrested Alexandra Nicks, 26, while she was in court answering to a separate charge.

Nicks, known as OMB Bloodbath, was taken into custody Friday on charges of directing activities of a violent criminal street gang.

Nicks is believed to belong to the 100% Third Ward and "103" street gangs, according to KTRK.

Nicks was convicted in 2013 for burglary of a habitation, according to court documents. Nicks was an up-and-coming rapper who recorded dozens of songs littered with violent, gang-related lyrics.

According to Rhymeswithsnitch.com, Jakobi was arrested last month in Georgia during a gang task force crackdown.

Jakobi was charged with criminal gang activity, criminal trespass and altering the ID of a firearm after he was caught carrying a gun with a scratched off serial number.

The teenager is listed as "indigent" on his arrest paperwork, despite being the eldest son of million-selling rapper Future Hendrix, real name Nayvadius Wilburn.

Future has 7 or 8 other children by as many women, including Ciara Wilson's son Future Zahir Wilburn, 5.

Sadly, Future's busy schedule prevents him from spending meaningful time with all of his children. 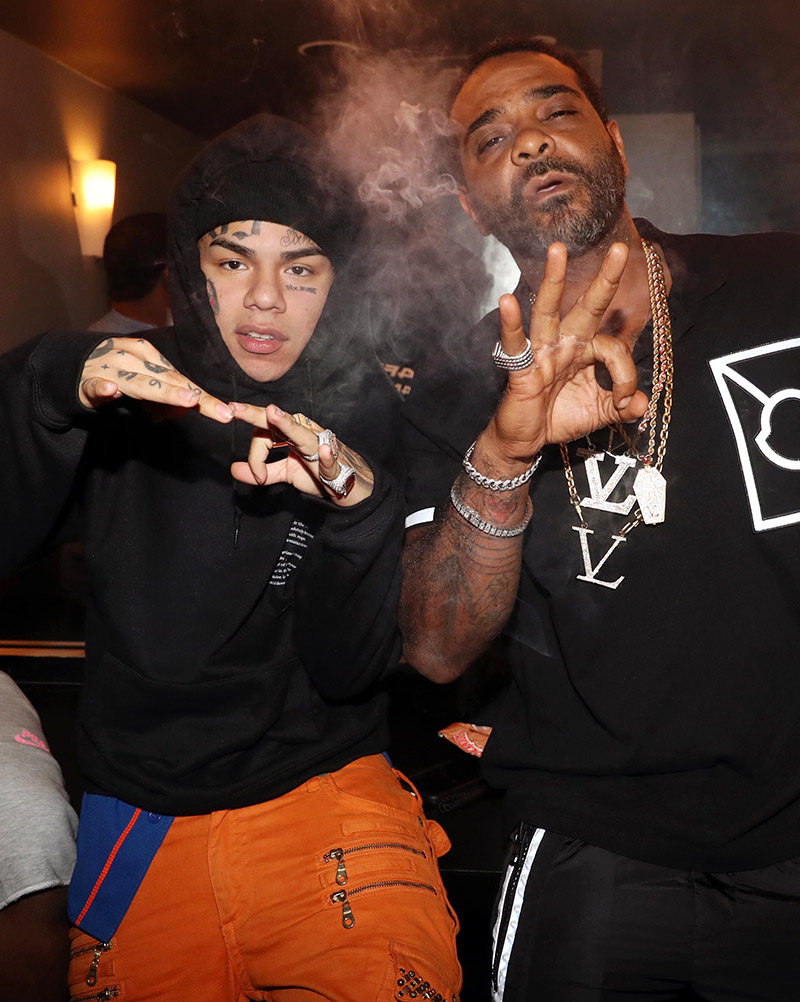 A New Jersey paralegal who used a Department of Justice computer to find out who snitched on her son has been charged with multiple felonies. Tawanna Hilliard, 44, pleaded not guilty to witness tampering, obstruction of justice and harassing witnesses.

END_OF_DOCUMENT_TOKEN_TO_BE_REPLACED

Cardi B's life is in danger. The 25-year-old Bronx rapper was threatened on social media after she posted an Instagram.com image of herself wearing a blue fur coat last week. She captioned the image: "I hate flue but this coat was too poppin."

Members of the Crips street gang took her caption as an insult because of the term "flue" -- which merges the words "f-ck" and "blue".

END_OF_DOCUMENT_TOKEN_TO_BE_REPLACED

If you support rapper Cardi B's music, just know that you are helping her promote gang culture to your children.