Reality TV star Teresa Giudice posed for a family portrait behind bars at the formidable FCI Danbury prison in Danbury, Connecticut, where she is serving a 15-month sentence for wire fraud, mail fraud, and bankruptcy fraud, and other white-collar crimes.

The most interesting aspect of this story is the fact that prison officials banned flamboyant Bravo host Andy Cohen from visiting Giudice in prison. The obvious reason is he’s not family. But another reason might be that prison officials don’t watch reality shows and they couldn’t care less who he is. I wish I could’ve seen his face when he was told he is not welcome at the prison. Boy, bye!

Us Weekly confirms that the photo was taken recently in the visitation room of FCI Danbury, where Tre is serving a 15-month sentence for bankruptcy fraud, conspiracy to commit mail fraud, wire fraud, and failure to pay taxes. Through her lawyer, Teresa told the mag, “I miss Joe and my girls terribly, but we are going to get through this as a family one day at a time.”

Giudice is apparently adapting well to prison life. Her husband Joe tells Extra she has a fan club behind bars:

He said the time apart from each other has made him “appreciate her way more,” and that “she made us wait an hour to make her hair, to do her hair. That was a little annoying.”

The family-oriented judge has allowed Joe to stay home with the couple’s children until Teresa is released from prison. Then Joe will begin serving his 41-month sentence for his part in his wife’s criminal activities. 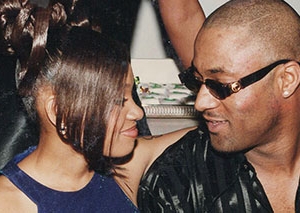