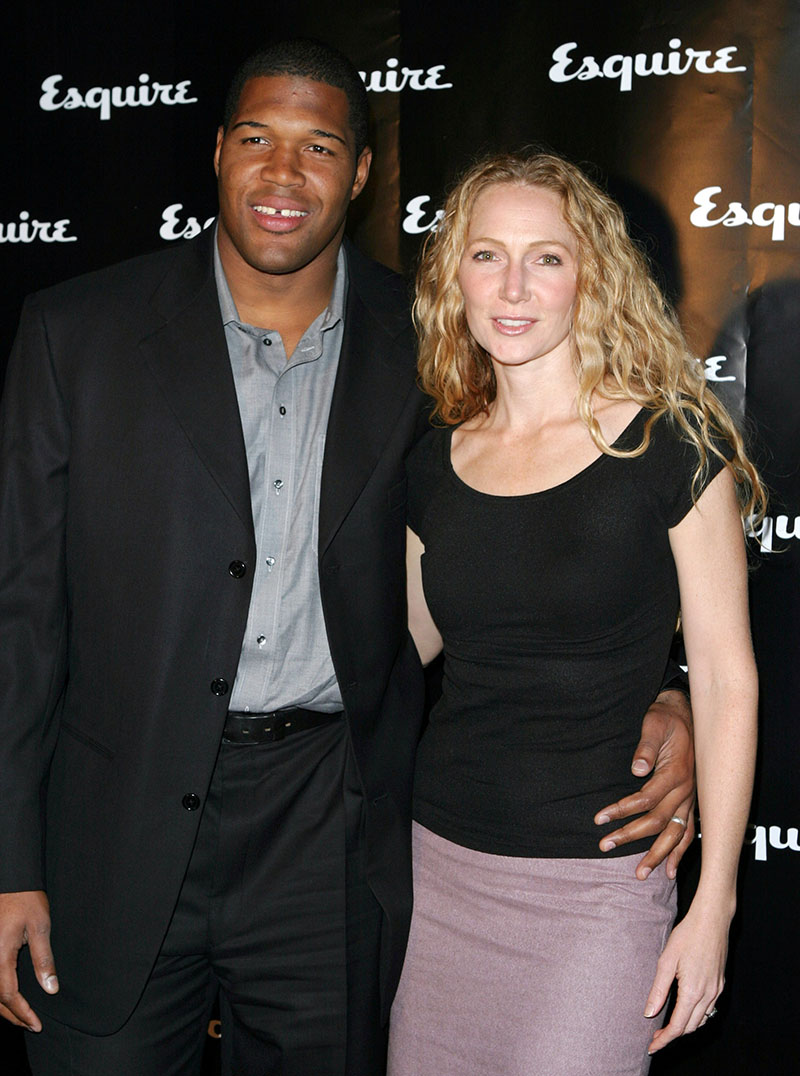 She was taken into custody Friday, June 25, in New York City and booked for criminal contempt, TMZ reports.

Marianne Ayer told police the alleged harassment and stalking began after she broke up with Jean.

Jean was arrested after she allegedly violated the order of protection by showing up at Marianne's house.

Marianne said Jean took her son's plastic gun, which he used in a student film, and threatened her. 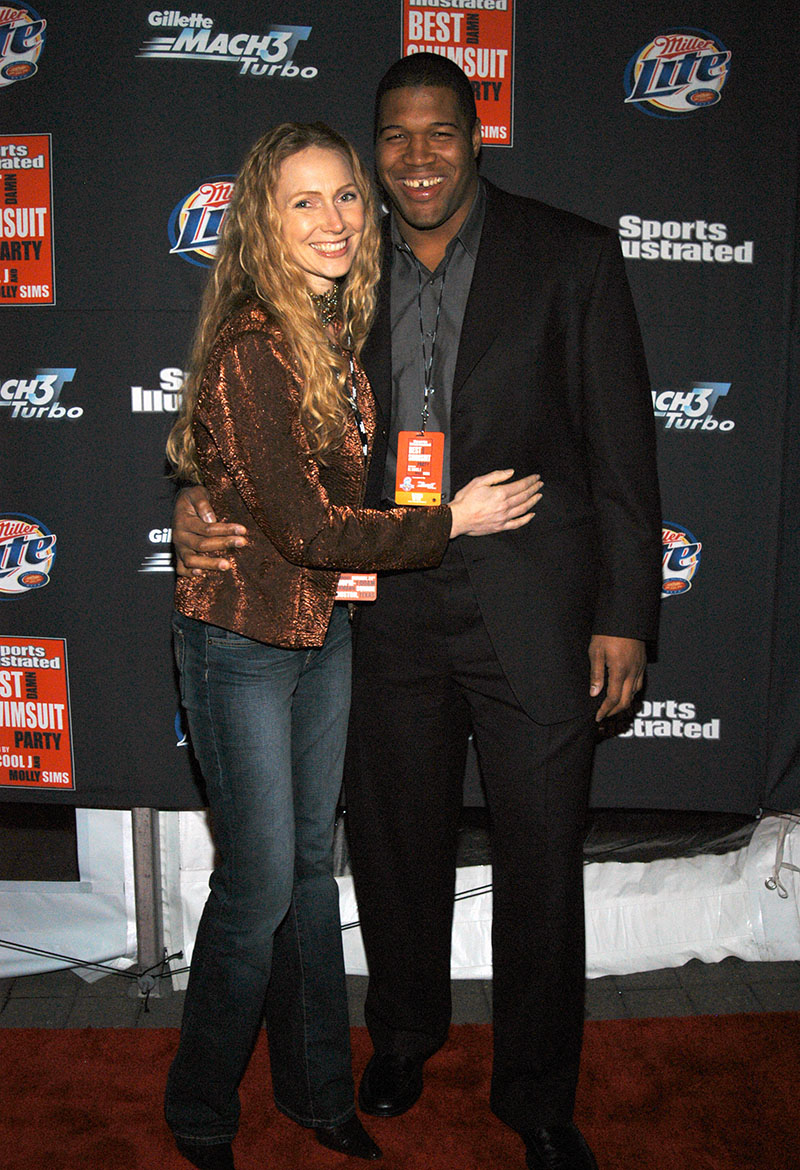 Jean and Strahan, pictured in 2004, were married in 1999 after meeting at a spa. They share 16-year-old twin daughters, Isabella and Sophia.

Strahan and Jean finalized their bitter divorce on July 20, 2006. She was awarded $15 million in a divorce settlement, in addition to $18,000 in monthly child support.

A man who was allegedly beaten to death by Virginia Tech football player Isimemen Etute had identified himself as a woman on the Tinder dating app.

Etute, 18, was charged with second-degree murder in the fatal beating of Jerry Smith, 40.

Police say Etute and Smith had matched on the dating site Tinder, but Smith identified as a woman named "Angie" on the app.

Smith allegedly used a woman's picture in his profile and asked men to wear a blindfold when they arrived at his apartment.

Etute reportedly went to Smith's apartment on April 10, where "Angie" performed oral sex on him.

Etute's attorney, Jimmy Turk, said his client didn't realize Smith was a man until he returned to the apartment for a second sexual encounter on May 31.

Smith's body was found in his Blacksburg, Va. apartment on June 1. A coroner determined his death was caused by blunt force trauma to the head and face. The coroner's report noted Smith lost multiple teeth, had multiple skull fractures and every bone in his face was fractured.

Etute, who was suspended from Virginia Tech and the football team, was released on $75,000 bond at his bond hearing on Wednesday. He is allowed to stay with family in Virginia Beach on house arrest and electronic monitoring until his trial in September.

Multiple Virginia Tech players -- most of them wearing Virginia Tech gear -- were in attendance to support Etute at the packed bond hearing.

There are reports that Smith was fired from Blacksburg area bars for sexually harassing young men.

Turk implied that he might use a gay panic defense, which is banned in Virginia and 10 other states. The gay panic ban becomes effective in Virginia on July 1.

Turk struggled to fight back tears when he asked for bond for his client.

"I've tried more than 100 murder cases in my lifetime, and normally I don't even ask for bail," Turk said with his voice quivering. "If there's ever been a time for someone to be considered for bail, this is it."

I condemn the senseless violence that resulted in Mr. Jerry Smith’s death and I am sending hopes for healing to his friends, family and all community members who are hurting. Some are reporting he was a relative of my family; however, this is a falsehood and a distraction.

A Virginia Tech linebacker who allegedly killed a man he thought was a woman will reportedly use the Gay Panic Defense (GPD).

Isimemen Etute, 18, was suspended from the team after he was charged with second-degree murder in the June 2 beating death of Blacksburg, Virginia, resident Jerry Smith, 40.

Prosecutors say Etute allegedly told investigators he went to Smith's apartment on April 10 for oral sex after he was matched with a woman named "Angie" on the Tinder dating app.

He said he returned to Smith's apartment on May 31 for a second sexual encounter after he was matched with another woman on the app, according to Yahoo Sports. However, he became enraged when he discovered the "woman" was actually Smith.

Etute told police he punched Smith five times in the face and stomped the victim multiple times as he lay on the floor. Etute said he heard Smith "bubbling and gurgling" and left the apartment without calling the police or medics.

According to the county medical examiner, Smith died from blunt force trauma to the head and face. Prosecutors said that Smith lost multiple teeth, had multiple skull fractures and every bone in his face was fractured.

Smith's family called police to conduct a welfare check at his apartment after their phone calls went unanswered.

A family spokesperson described Smith as a proud, openly gay man who worked in the restaurant industry and wouldn't harm a fly.

Etute, who was ranked 29th of Virginia Tech's 2021 recruiting class, appeared at a bond hearing on Wednesday. He was released on $75,000 bail and is allowed to stay with family in Virginia Beach, on house arrest and electronic monitoring, until his trial in September.

Multiple Virginia Tech players were in attendance at the packed bond hearing, according to Yahoo Sports.

The gay panic defense (not to be confused with homosexual panic) is used by defense attorneys to reduce the charge for a client who is accused of assault or murder of a member of the LGBT+ community.

Gay panic occurs when the perpetrator temporarily loses his sanity and becomes extremely upset at a perceived threat to his manhood after the sexual orientation or gender of the victim is revealed.

The National LGBT Bar Association defines the gay panic defense as "a legal strategy which asks a jury to find that a victim's sexual orientation or gender identity is to blame for the defendant's violent reaction, including murder."

Doughty, 26, is charged with first- and second-degree murder, misdemeanor and felony assault and possession of a deadly weapon in the stabbing death of Tiffany Wilson, according to the Baltimore Sun.

Baltimore police responding to a 911 call around 4:15 p.m. Friday, found Wilson unresponsive with stab wounds to the chest. She was pronounced dead at the scene.

Doughty is best known as "Wheelie Queen" in the coming-of-age documentary on the dirt bike culture in Baltimore.

The film, which premiered in October on HBO MAX, is an adaptation of Lofty Nathan's documentary "12 O'Clock Boys" starring Meek Mill and Jahi Di'Allo Winston.

Wilson's death is the first homicide of 2021 in Baltimore. Doughty faces life in prison if convicted on all charges.

END_OF_DOCUMENT_TOKEN_TO_BE_REPLACED

Police in Troy, NY have identified the four victims, 2 women and 2 children, found dead in the basement of an apartment house on Tuesday.

Police sources tell the NY Post the victims' throats were slashed and their hands were bound behind their backs.

END_OF_DOCUMENT_TOKEN_TO_BE_REPLACED

An openly gay Bronx teen retaliated against 2 school bullies by stabbing one of them to death. The incident happened on Wednesday morning in a classroom at the Urban Assembly School for Wildlife Conservation, a high school in Bronx, NY.