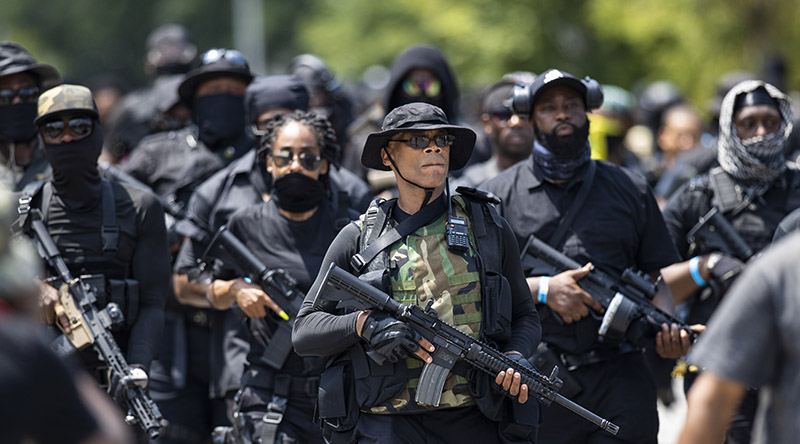 The feds are investigating an accidental shooting that wounded three people at a Breonna Taylor protest in Louisville, Kentucky.

The three victims were members of a Black paramilitary group who call themselves NFAC, an acronym for "Not F***ing Around Coalition."

The incident happened when a female trainee accidentally discharged her assault rifle into the crowd of marchers who were protesting the police murder of Breonna Taylor in Baxter Park on Saturday.

The victims were transported to a hospital with non-life-threatening injuries.

Kentucky Attorney General Daniel Cameron's office is heading up the investigation into the accidental discharge of an assault rifle.

Taylor was shot 8 times and killed in March when three plainclothes officers served a no-knock warrant at her home in search of a drug suspect who was already in custody.

One of the officers was fired this year, but protesters say they will not rest until all three are terminated.

In an unrelated incident, a protester was shot and wounded when another protester fired on a car as it drove through a crowd of demonstrators on Interstate 225 in the Denver suburb of Aurora on Saturday.

Police said a protester fired a weapon at the car, but missed and struck at least one person who was taken to a hospital in stable condition.

The protesters were trying to draw attention to the death of Elijah McClain, a Black man who was stopped by police after a 911 caller reported him as suspicious in August 2019.

McClain fell unconscious after a cop placed him in a chokehold and a paramedic injected him with 500 milligrams of the sedative ketamine. He was later declared brain dead and taken off life support.