Brett Favre is threatening to file a lawsuit against Dr. Umar Johnson for accusing the NFL legend of stealing from the poor people of Mississippi.

Favre was previously investigated for allegedly raiding his own charitable foundation to fund an athletic club at his alma mater in Mississippi.

The former Green Bay Packers quarterback was accused of receiving $5 million in welfare funds to build a new volleyball gym for his daughter at the University of Southern Mississippi.

Favre repaid the millions, and he considers the matter closed. But Dr. Umar won’t let him to forget about his alleged welfare fraud in his podcasts.

Favre retained a law firm to represent him in a potential defamation lawsuit against Dr. Umar.

The law firm of Kasowitz Benson Toress LLP sent a notice to Dr. Umar warning him that they are investigating “potential legal claims against you arising from certain public statements you have made about Mr. Favre.”

The law firm leaned heavily on Dr. Umar, warning him to “preserve, and not destroy, conceal, alter or otherwise spoliate, any and all documents and information in your possession…”

Dr. Umar posted the letter on his Instagram page on Friday. He added the text: “White privilege vs Black power. First they came for Kanye, then Kyrie, now they coming for King Kong!” 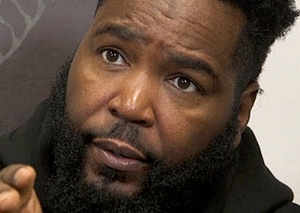