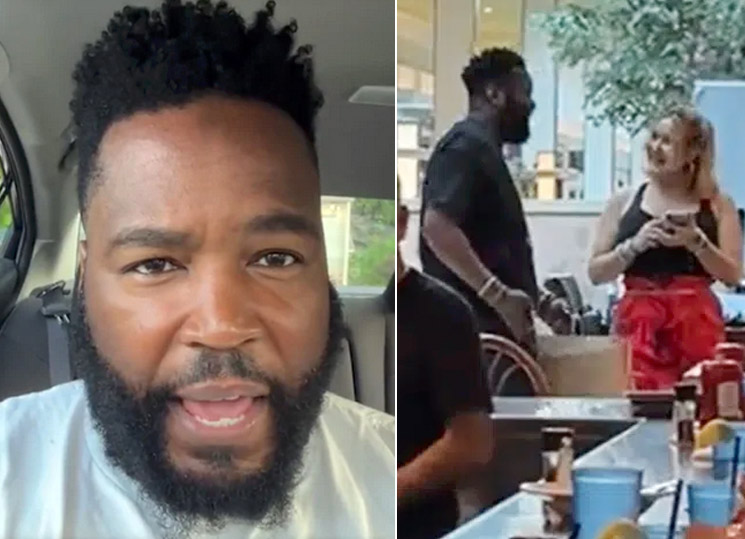 Dr. Umar Johnson went viral this week when video showed him chatting with a Caucasian woman.

The video went viral because Dr. Umar, a clinical psychologist, has promoted himself as a Black nationalist who is vehemently opposed to interracial marriages.

In 2017, he said, "When you marry a White woman, you're investing in White supremacy. There is no way you can stand with Black people when you sleep with White folk. There's no way you can care as much about our issues as you need to when you have to be concerned about what your wife and her White family thinks about our agenda."

Someone took him up on the challenge and filmed Dr. Umar chatting with a non-melanated woman at New Jersey's Cherry Hill Mall.

The video went viral on June 2, garnering over 4 million views. Dr. Umar immediately took to social media to defend himself.

"Yes, I was at Cherry Hill Mall today," he tweeted. "My iPhone crashed last night and the closest Apple store with an available appointment today was in Jersey. As I was leaving the mall, I stopped at a kiosk to view the incense & crystals. That non-afrikan woman is simply the vendor."

Yes, I was at Cherry Hill Mall today. My iPhone crashed last night and the closest Apple store with an available appointment today was in Jersey. As I was leaving the mall, I stopped at a kiosk to view the incense & crystals. That non-afrikan woman is simply the vendor.

To the casual observer it seemed that Dr. Umar was giving the young lady his phone number.

Dr. Johnson tweeted: "Can't even grab some incense and oils at the mall without Negroes going crazy. Any conscious Queens out there wanna volunteer to handle shopping for King Kong Kongalicious since I'm obviously too popular to shop in peace? The paparazzi won't let me breathe, ladies."

He then pleaded with the Twitter user to take the video down.

"Is that the Prince of Pink Toes?

"I'm a descendaaaaaaaaaant... of Tiger Woods."

Is that the Prince of Pink Toes?

“I’m a descendaaaaaaaaaant… of Tiger Woods”