TIME magazine's controversial cover is dropping just in time for Mother's Day, May 13.

Shocking images of the Swedish Minister of Culture carving into a "nigger cake" are sweeping the Internet. The bizarre incident occurred on Saturday in Sweden when Swedish minister of culture Lena Adelsohn Liljeroth celebrated a tax funded party for the Stockholm cultural elite, aka cultural elitist snobs.

The cake depicts an African tribal woman's breasts, abdomen and vaginal areas. The icing is rich chocolate, and the cake is red velvet.

The Minister of Culture is pictured laughing as she performs a clitoridectomy on the cake by slicing into the area of the cake that depicts the genitals.

A performance artist's head in blackface protrudes from the table. The artist screams each time the cake is sliced. Liljeroth then feeds the cake to the artist.

Makode Linde, the Swedish "performance artist" is also responsible for baking the offensive cake. Maybe it will comfort you to know that Makode is black? See what he looks like after the break.

END_OF_DOCUMENT_TOKEN_TO_BE_REPLACED

There was a time, not so long ago, when Mary J. Blige was on top of the R&B world. Her rich, superior vocals were compared to the likes of Aretha Franklin and Patti LaBelle. But you can bet that neither Aretha nor Patti would stoop so low as to sing for a Burger King fried chicken meal on top of a lunch table.

Thus is how far Mary J. Blige has fallen.

Yesterday, Burger King pulled the commercial ad featuring the 41-year-old singer after she was dragged unmercifully across all major social networking websites on Monday. How embarrassing for Mary, whose 1992 debut album, What's the 411? is still considered an R&B classic.

You can feel Mary's humiliation throughout the commercial as she wails the answer to the question: "What's in the new chicken snack wraps?"

The theme of the Burger King commercial is "Exciting things are happening at Burger King." Apparently, nothing exciting is happening in Mary's career right now.

Watch the ad after the break.

END_OF_DOCUMENT_TOKEN_TO_BE_REPLACED

Actress Alicia Silverstone has the Internet buzzing about the method she uses to feed her 11-month-old son, Bear Blu. Alicia chews her baby's food before spitting it into his mouth.

According to celebrity blog TMZ.com, Alicia posted a video of herself feeding her son on her popular health food website over the weekend.

“I fed Bear the mochi and a tiny bit of veggies from the soup from my mouth to his,” Silverstone wrote on her blog. “He literally crawls across the room to attack my mouth if I’m eating.... Now he is grabbing my mouth to get the food!”

Before you gag, you should know that the animal kingdom also pre-digests animal fodder by swallowing it and regurgitating the stomach contents to feed their young.

END_OF_DOCUMENT_TOKEN_TO_BE_REPLACED

Once again, Beyoncé was caught telling a bold faced lie after claiming she attended her husband Jay Z's concert at Carnegie Hall on Monday night.

But was she really lying this time?

On Tuesday, the 40/40 club's PR people sent out an email stating, “Despite various reports, Beyoncé did not attend Jay-Z’s concert.”

Indeed, the only photos we saw of Beyoncé were when she was leaving Jay Z's 40/40 club after the concert.

Beyoncé herself added to the confusion when a NY Daily News reporter caught up to her outside the 40/40 club. The reporter specifically asked Bey if she attended the concert.

Shortly after the booty-licious mama arrived at her husband’s 40/40 Club for post-concert festivities Monday night, we asked her if she’d gone to the show.

“Yes,” she told us, calling her spouse’s concert “amazing.”

Apparently, Jay Z and his people were concerned that not enough mention was made of Beyoncé's appearance at the 40/40 Club after the concert. The 40/40 Club needs all the publicity it can get. As you know, the bar came under scrutiny when the city's health department shut them down for failing an inspection one day after the grand re-opening last month.

END_OF_DOCUMENT_TOKEN_TO_BE_REPLACED

Octavia Spencer should be on top of the world. Her many accomplishments over the past year make her the envy of her peers. But the 41-year-old actress, renowned for her portrayal of a sassy southern maid in 'The Help,' is worried, despite all the accolades.

"I am not healthy at this weight," said Spencer to the media assembled backstage at the Screen Actors Guild Awards, where she won a best supporting actress trophy.

"Any time you have too much around the middle, then there is a problem. [And] when you reach a certain weight, you are less valuable," she said, referring to Hollywood's strict physical standards.

Spencer says that Hollywood should be more accepting of actresses of different sizes, including those who are thin.

"I feel for the overly thin women as much as I do for the overweight women. It ... has to change," she said.

Ms. Spencer indicated that her problem may stem from the fact that she overeats when she's feeling down: "If more women ate, they would be a lot happier. Let me tell you, I am a lot grumpier when I don't eat."

How ironic that Jay Z once said "I'm not a businessman/ I'm a business, man." How right he was.

Rap mogul Jay Z, 42, is a former crack dealing rapper turned businessman who doesn't have a clue what it takes to run a business.

The majority of Jay Z's business holdings were acquired to boost his image and increase his visibility in the corporate world. That explains why his businesses often fail.

Take for instance his 40/40 sports bar in New York city. Jay Z threw a splashy Grand reopening bash for the restaurant/lounge earlier this week. But it was more of a show to make himself the center of attention. It's hard to say who is the biggest fame whore: Jay Z or his wife Beyonce.

Photos of Jay Z schmoozing with billionaire Warren Buffet were splashed all over the media on Wednesday. But within 48 hours, Club 40/40 was shut down by the city's health department for violating a number of health code violations.

Apparently, 40/40 wasn't expecting a visit from the health inspectors so soon.

If Jay was really an astute businessman he would have made sure his establishment was prepared to open to the public, rather than using the reopening as a vehicle to flaunt his wealthy friends to the media.

I'm embarrassed for him.

McDonald's is back in the news again.

This time, a Philadelphia McDonald's restaurant is in the news after a former employee released a cell phone video showing live rats scurrying over and around hamburger buns.

According to Fox News affiliate in Philadelphia, Karrium Demaio said he frequently saw mouse droppings on bread, and was told by the restaurant manager to brush the droppings off the bread, throw out the chewed bread and serve the rest to customers.

“There hasn’t been a time when we couldn’t go in the back and see mouse droppings on the bread,” said Demaio who was fired for missing a shift.

“That wasn’t the first time. That was about the sixth or seventh time,” he said. “That’s what made me like, I got to get video of this," he said.

Demaio added: “I was going back there to get something else and I heard some rustling, so I turned around, and I look, I seen a mouse inside the bread. Not on top of the package, but inside of the package.”

END_OF_DOCUMENT_TOKEN_TO_BE_REPLACED

Remember the rowdy lesbian couple who attempted to assault a McDonald's cashier but they caught a savage beat down instead? The NY Daily News reports that the two lovers pleaded not guilty to criminal trespassing for jumping the counter.

According to the NY Daily News, Denise Darbeau (above left) and Rachel Edwards (who looks like a cleaned up Trina), were already fighting mad -- with each other -- before they entered the West Village McDonald’s on Oct. 12, 2011.

The pair had gone drinking, then got into a wild fracas with McDonald’s employee Rayon McIntosh, an ex-con, who was caught on video beating the women after they entered an employees-only area.

According to unsealed court records, Edwards (the Trina look-a-like) is alleged to have said to Darbeau: "Why did this happen? Why don’t you love me the way I love you?"

Both women entered "not guilty" pleas in a Manhattan court on Wednesday. They were both offered probation in return for pleading guilty. But Darbeau and Edwards declined through their attorney. They face up to seven years in prison if found guilty.

Their lawyer, Harold Baker, said outside court his clients would not cop to a felony. Baker said his clients are the real victims. 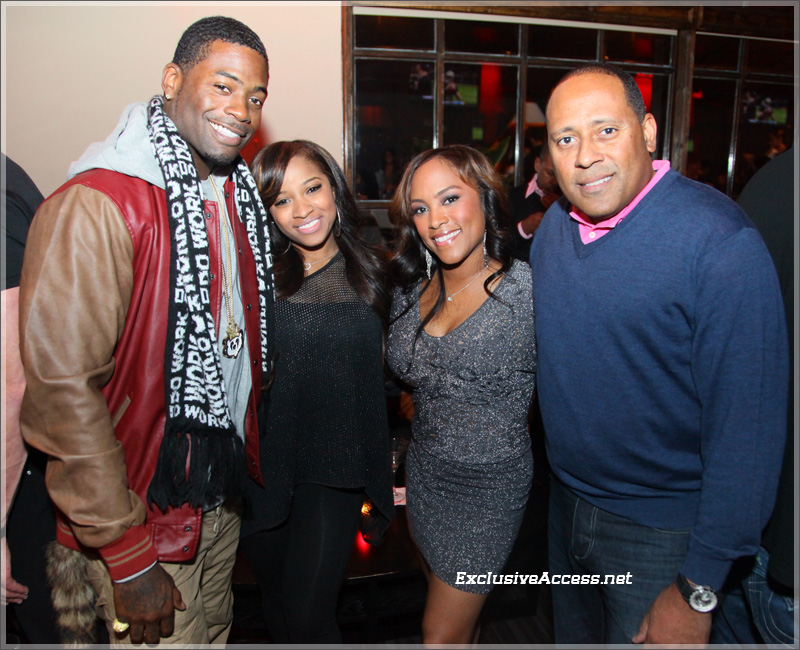 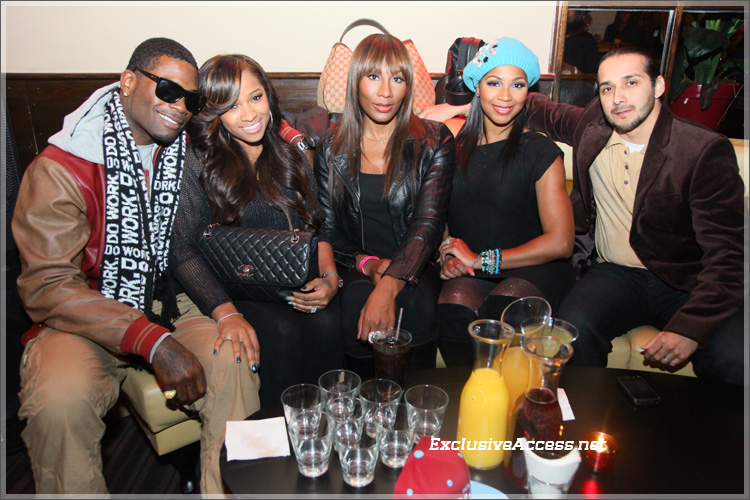 We were surprised to see Trina Braxton accompanied by her husband, Gabe Solis (far right), after she caught him cheating online. Maybe Trina accepts the fact that most men are genetically pre-wired to cheat in order to further the human species (but that's for another blog post).

Frank Ski's Restaurant & Lounge is located at 2110 Peachtree Rd. in NW Atlanta. The restaurant offers Southern food and features outdoor patios and private dining as well as a bar and lounge area.