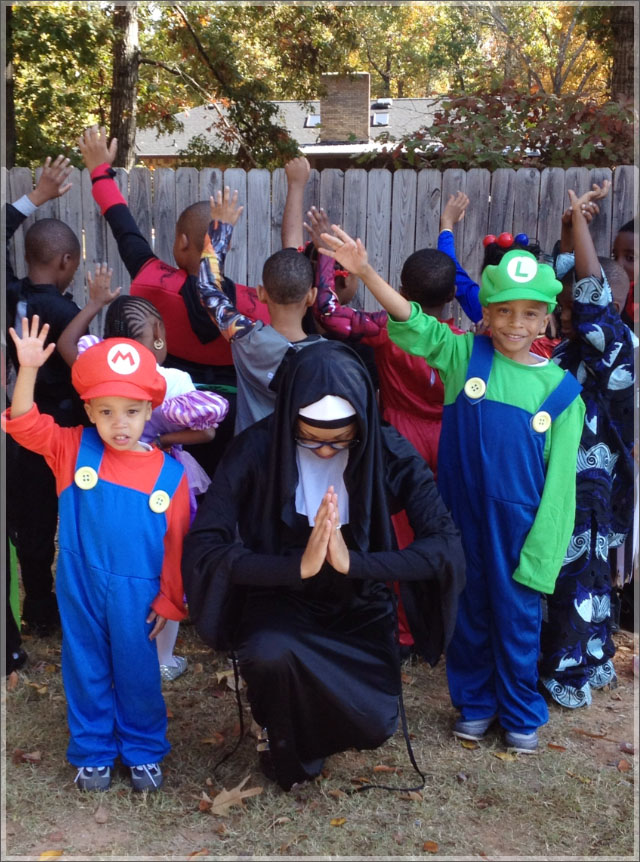 R&B Diva Monica celebrated Halloween with her sons, Romelo and Lil Rocko at their Atlanta private school today. After their costume party at the school the boys changed to go Trick or Treat with the entire Family. Monica was dressed as the Nun (Whoopie Goldberg's character) in the movie 'Sister Act', which is one of Mo's favorite movies. 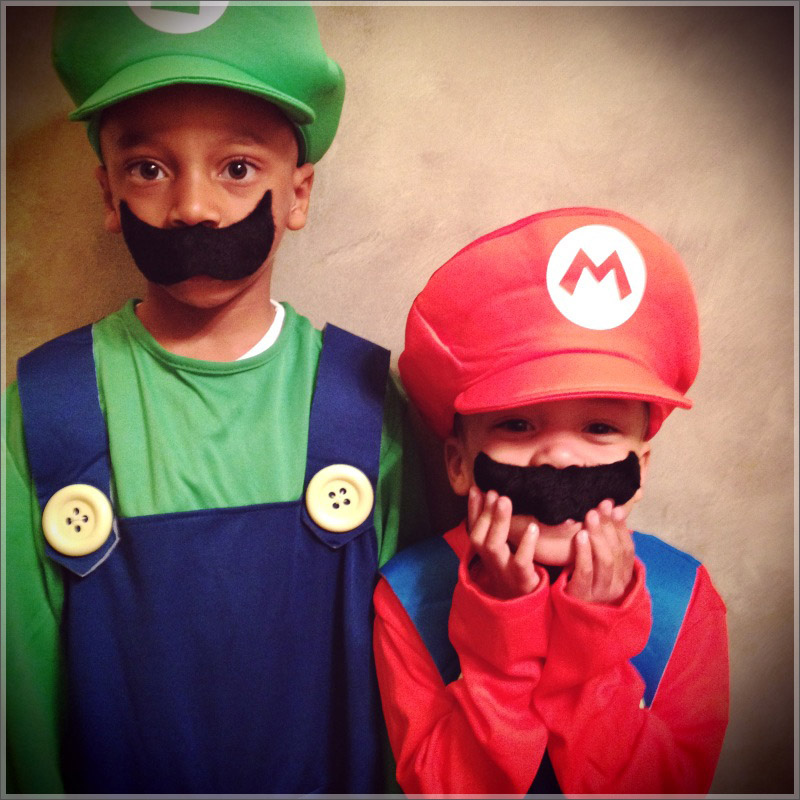 Romelo was Super Mario and Rocko was Luigi. Aren't they adorable!

The made-for-TV wedding between Kim Kardashian and Kris Humphries is over. The divorce papers have been filed and the $17 million checks have been deposited in the banks. The only losers are the public who fell for the sham of a wedding. But if you read Sandrarose.com, you already knew that Kim Kardashian just wanted the ring and the exposure.

Kim Kardashian filed for divorce Monday morning, after 72 days of not-so-wedded bliss to Kris Humphries ... TMZ has learned, and now we have the documents.

We're told even though the marriage was short, she is not seeking an annulment. It's a garden variety divorce, in which Kim cites "irreconcilable differences."

The date of separation is listed as today, Oct. 31, 2011. According to the docs, Kim wants Kris to foot his own lawyers' fees and she'll pay hers. And, she wants the court to reject any move by Kris to get spousal support.

And, the docs list the length of the marriage as a measly 2 months.

As we first reported, the couple has a prenuptial agreement ... Kim made sure of that.

"I have never sexually harassed anyone, let's say that. Secondly, I've never sexually harassed anyone, and yes, I was falsely accused while I was at the National Restaurant Association, and I say falsely, because it turned out, after the investigation, to be baseless. The people mentioned in that article were the ones who would be aware of any misdoings, and they have attested to my integrity and my character. It is totally baseless, and totally false, never have I committed any sort of sexual harassment," Herman Cain told FOX News about claims from Politico that he was involved in the sexual harassment of two former employees.

END_OF_DOCUMENT_TOKEN_TO_BE_REPLACED

U.S. President Barack Obama sure knows how to play dirty. Now that political frontrunner Herman Cain has positioned himself as Obama's direct competition for the White House in 2012, Obama's camp comes out swinging with false allegations against the GOP candidate.

According to POLITICO.com, two women have come forward to complain of sexual misconduct by Mr. Cain during his tenure as the head of the National Restaurant Association in the 1990s. Supposedly, the two female employees complained to colleagues and senior association officials about inappropriate behavior by Cain. The women ultimately left their jobs at the trade group after quietly resolving the matter, multiple sources confirm to POLITICO.

The women complained of sexually suggestive behavior by Cain that made them angry and uncomfortable, the sources said, and they signed agreements with the restaurant group that gave them financial payouts to leave the association.

The agreements also included language that bars the women from talking about their departures.

Yet, they are violating their agreements by talking to the media? Why is it news if it happened in the 1990s? If they thought they had a case, why didn't they sue? My guess is the women have demanded more hush money from Mr. Cain, who rightfully refused.

END_OF_DOCUMENT_TOKEN_TO_BE_REPLACED

Ignore all those breathless Stan reviews of the Kanye and Jay Z Watch The Throne opener in Atlanta last night. A loyal reader who attended the show told Sandrarose.com that the tour's 1st stop in Atlanta started 2½ hours later than the 7:30PM time stamped on the tickets.

The sound system was crappy. The show was not sold out as some Stans have reported. And once it became evident that the show would not sell out, the tour's promoters dumped hundreds of tickets on radio stations to give away.

When the rappers were finally announced at 9:00PM, the announcement was met with a round of boos from the audience, some of whom spent upwards of $450 for their tickets.

WTT continues with a 2nd show at Philips Arena tonight before moving on to Greensboro, NC on Oct. 30.

Read the reader review after the break.

END_OF_DOCUMENT_TOKEN_TO_BE_REPLACED

Once considered a source of amusement, presidential candidate Herman Cain is now the leading contender among the Republican presidential hopefuls. Cain has gained double digit leads over his competition because he is the antithesis of U.S. President Barack Obama.

On Martin Bashir's television program yesterday, Finney said most Republicans feel comfortable with Cain because of his race.

"One of the things about Herman Cain is, I think that he makes [the] white Republican base of the party feel okay, feel like they are not racist because they can like this guy," Finney said. "I think he's giving that base a free pass. And I think they like him because they think he's a black man who knows his place. I know that's harsh, but that's how it sure seems to me."

"Thank you for spelling that out," Bashir responded. Source

The Weekly Standard blog points out that Cain's supporters see him as a safer alternative to Barack Obama, whose narcissism and Muslim agenda quickly threw him out of favor with American voters.

During an online production of NBC's Meet the Press this week, Democratic congressman Elijah Cummings of Maryland said white voters support Cain to show they aren't racist. “I think when [members of the Tea Party] can vote for a Herman Cain and hear him say the things that he says they feel like, ‘Well, you know, I can, I support this guy and...so it shows that I’m not racist and I’m supportive,'" Cummings told host David Gregory.

British singer Adele has canceled the rest of her tour dates for 2011 just days after her album "21" began its 13th week at no. 1 on the Billboard 200 and her single "Someone Like You" began its fifth week atop the Hot 100, according to Billboard.com.

The singer received worldwide acclaim for her powerful pipes, and singers such as Britney Spears praised Adele for her "amazing voice". But to others, included this blogger, it sounded like Adele was straining her voice to sing. It turns out we were right: Adele's "amazing" voice was due to a medical condition called a vocal cord hemorrhage -- otherwise known as a chronic sore throat.

A statement released by her publicist, stated Adele was scheduled to undergo surgery to repair her vocal cords. The first step in the treatment of vocal cord hemorrhage is to rest the voice. Normally, resting the vocal cords works in 90% of cases.

But in Adele's case, resting her vocal cords failed to resolve her bleeding because the damage is so extensive.

According to Voice Medicine,

Voice rest alone is adequate treatment for a single, isolated hemorrhage. Repeated hemorrhage, on the other hand, always has an underlying cause, be it a harmful voice behavior or an irregularity on the vocal fold. In the first case, voice therapy may be useful, and in the second, microlaryngoscopy may be necessary to remove or repair any small irregularities or blood vessels prone to bleeding. This is among the more delicate surgeries in laryngology.

Cobb County police have apprehended the man who kidnapped, raped and robbed a CVS customer in Austell last week.

Sheriff's officers and U.S. Marshalls arrested Darrious Mathis near Greenbriar Mall shortly after 10:30 a.m. Friday. The 21-year-old is charged with hijacking [a] motor vehicle, possession of a firearm during the commission of a crime, kidnapping, rape and aggravated sodomy.

Police said the victim had just walked out of the CVS Pharmacy at 800 East-West Connector in Austell at about 1:30 a.m. Wednesday, when she was approached by the suspect. Investigators said he forced the woman into her vehicle and had her drive him to an unknown location where he raped her.

Police said the suspect then had the woman drive him to several ATM's in the metro area and forced her to withdraw money from her bank account.

At some point during the crime, the suspect got out of the victim's car and ran away on foot.

Sandra Bullock must be paying her agents very well! According to US Weekly:

During Thursday's amFAR Inspiration Gala at the Chateau Marmont in L.A., Andy Warhol's iconic "Peaches" print was auctioned off for $14,000. The lucky bidders happened to be Sandra Bullock's agents, who bought the artwork as a gift for the actress' 1-year-old son, Louis. "I want to thank Kevin Huvane and Bryan Lourd for not being cheap f-cks and gifting my son with his first Warhol," a radiant Bullock joked. (Proceeds from the auction benefit amFAR's AIDS research.) The 47-year-old Oscar winner, who reunited with her Speed costar Keanu Reeves for dinner in New York City on Wednesday, was on hand to honor the late Elizabeth Taylor, who helped created amfAR in 1985.