33-year-old Jamie Calloway of Ohio was arrested last night and booked into the Montgomery County jail on a misdemeanor charge of menacing by stalking.

According to a Montgomery County Sheriff's Office spokesperson, the alleged stalking victim is a female corrections officer whom Calloway became attached to during a previous stint in jail on unrelated charges. Calloway allegedly slashed the woman’s tires, called her home repeatedly, and sent her packages in the mail.

Recent studies show that almost half of all hospitalized psych patients suffer from religious delusions or religious persecutions. Many of those studied were schizophrenics.

The head honchos in the Brooklyn Nets front office allowed rapper Jay Z to design the new team logo. The resulting logo is what you see above. What were they thinking? Jay Z is not a graphic artist, and that logo looks like something out of Spike Lee's School Daze.

The team -- which will be relocated from NJ to Brooklyn next season -- just released the new colorless logo ... which is already being hailed as "the new badge for Brooklyn."

Jay-Z, who is being credited with playing an "instrumental" role in the creation of the new logo, said in a statement, "The boldness of the designs demonstrate the confidence we have in our new direction ... The new colors and logos are examples of our commitment to update and refine all aspects of the team." 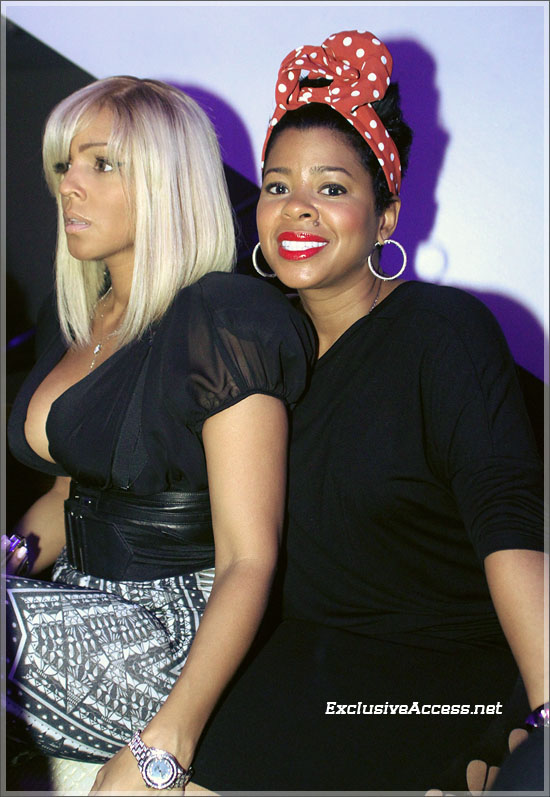 After partying the night away Saturday with her friend at Karu and Y in Miami, "Love & Hip Hop" cast member Chrissy Lampkin showed up at LIV Miami Beach on Sunday with her gal pal in tow. Chrissy's friend sat on her lap all night. I guess those rumors are true about Chrissy pulling the baddest bishes? Also seen partying at LIV was Think Like A Man actor Terrence J, rappers Busta Rhymes and Noreaga; ESPN's mouthpiece Steven A Smith, Atlantic Records' head honcho Micheal Kyser (@Littleburger on Twitter); Konvict Muzik exec Omar (Akon and Bu's brother); director Will Packer, and Stevie J on the turntables. The party was promoted by Headliner World, and the snaps are by Thad McAdams of Exclusiveaccess.net.

Update: Chrissy's lady friend has been ID'd. According to a loyal reader, the chick is a singer named Talia Coles, 2nd from left. Evelyn Lozada tweeted a pic of them earlier. Maybe the producers of "Love & Hip Hop" are preparing her for a role on the show.

END_OF_DOCUMENT_TOKEN_TO_BE_REPLACED 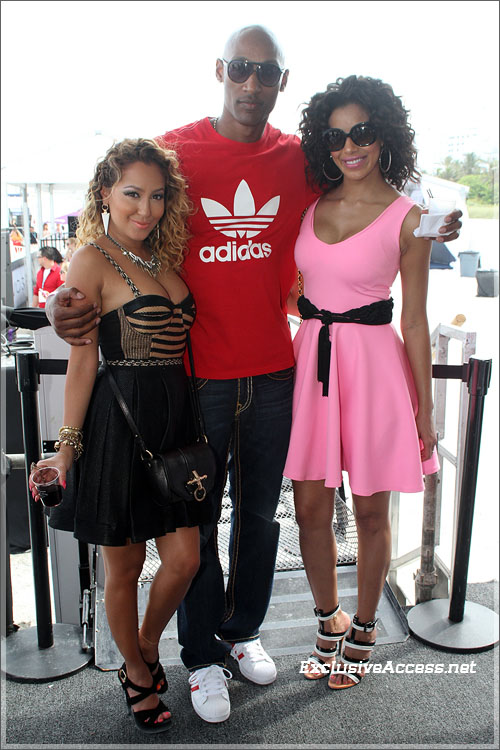 Did you know that former Cheetah Girls singer Adrienne Bailon and former BET host Julissa were shooting a reality show? Well, why didn't you tell me? On Friday, Adrienne and Julissa attended the 2012 Maserati Miami Beach Polo World Cup where they mingled with the filthy rich, and filmed scenes for their new reality show. Other celebs at the Polo event included singer Rod Stewart and famed Major League baseball pitcher Mike Piazza. 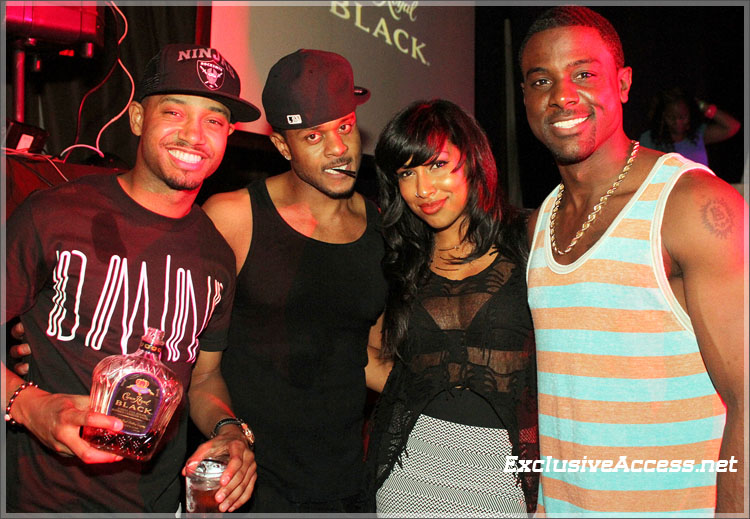 And on Saturday, Think Like A Man star Terrence J, and actors Pooch Hall and Lance Gross attended a live performance by Melanie Fiona at Karu & Y nightclub on Miami Beach. Also in the house were Love & Hip Hop cast member Chrissy Lampkin and her mole (pictured below). 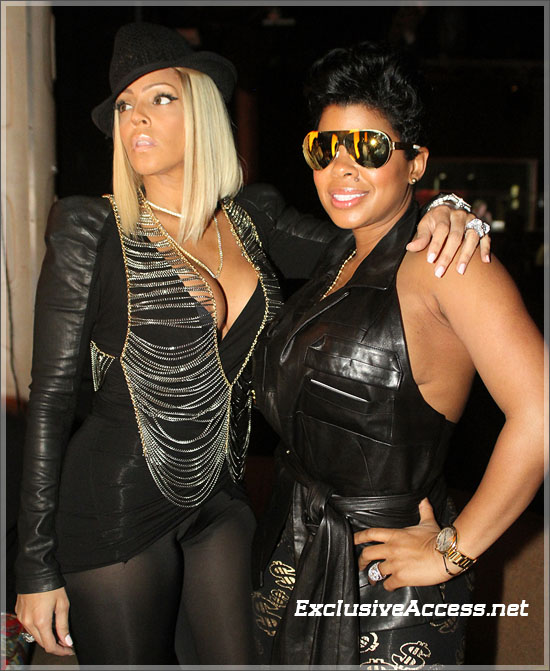 All photos by celebrity photographer Thad McAdams of Exclusiveaccess.net.

END_OF_DOCUMENT_TOKEN_TO_BE_REPLACED

The depth of true love is measured in actions, not words...

Khloe Kardashian's fans have one less weapon to form against her. According to gossip blog TMZ.com, Khloe has decided to pull the plug on her reality TV show so she can focus on her marriage to former Dallas Mavericks star Lamar Odom.

If this is true, Khloe has proven that Love is stronger than money or reality show ratings.

Sources tell TMZ, the show's second season will be its last ... because Lamar wants to focus on reviving his fizzling NBA career. We're told E! is still trying to convince the couple to reconsider, but K&L are standing firm ... they just don't want to do it anymore.

As we previously reported, Lamar was relegated to the Dallas Mavericks' inactive list after putting up career low numbers this season. If he's lucky, he'll be traded. If not, who knows ...

But we're told Lamar is determined to make a comeback -- and he feels he should focus on only one project. Lamar will be living in L.A. full-time and he's hired trainers to help him get his game back.

According to sources, Khloe and Lamar WILL make occasional appearances on the reality mother ship,"Keeping Up with the Kardashians" -- but that's it. No mas.

Beyonce has lashed out (again) at rumors that she paid a surrogate to carry her first child. In the latest issue of People magazine, Beyonce calls the rumors that she was never with child "stupid" and "crazy."

Remember that infamous television appearance in which Beyonce's belly bump appeared to fold in half? Beyonce had an answer for that: “It was a fabric that folded — does fabric not fold?” she said.

Yes, Beyonce, fabric folds -- pregnant bellies do not. At least not in the real world.

Take a look at the photos above. The pictures are a side-by-side comparison of Jessica Simpson and Beyonce when they were both 7 months pregnant. I won't insult your intelligence by asking you if Beyonce looks pregnant in the above pic.

Here's what we can see with our own eyes: Every part of Jessica's anatomy looks pregnant -- even her hands. On the other hand, no part of Beyonce looks pregnant -- not even her abdomen. She looks like she just got finished performing in a low budget play with a lumpy pillow stuffed under her dress.

Yet Beyonce and her mother, Tina Knowles, continues to insist that we're the crazy ones for believing our eyes.

Have we ever known Beyonce or her mom to be honest women? Has anything changed? Do we really expect them to come clean now after carrying on this charade for all these months?

END_OF_DOCUMENT_TOKEN_TO_BE_REPLACED

Rihanna has done it again. Universal Pictures’ decision to cast the troubled singer in their latest film "Battleship" has paid off. In just the opening weekend, "Battleship" has earned a staggering $170 million in ticket sales, despite the awful reviews of her first film.

And here's the kicker: the film doesn't even open in the United States until May 18!

By the way, "Battleship" can be downloaded for personal home viewing if you know how to find it online. But I prefer to wait until the film premieres in theaters. I predict Rihanna's "Battleship" will do bigger box office numbers than the Avengers kiddie movie.

END_OF_DOCUMENT_TOKEN_TO_BE_REPLACED

A Las Vegas man is being held without bond in the brutal bludgeoning deaths of a mother and her daughter in their central valley home.

Police say Bryan Clay, 22, was a total stranger to Ignacia and Arturo Martinez when he broke into their home and attacked them with a hammer on April 15.

Ignacia, 38, and her daughter Karla, 10, were both raped and beaten to death with a claw hammer. The weapon was not recovered.

The attacks left Ignacia's husband, Arturo, unconscious with traumatic head injuries. He remains in critical condition in an intensive care unit, unable to speak to investigators. Police say the Martinez's two sons, 9 and 4, were at home at the time of the attacks, but they were uninjured.

"This was a complete stranger killing a mother and daughter and attacking the father," Lt. Ray Steiber told the Associated Press. "I've been doing this (police work) 24 years, and you don't see cases like this. I can't even put this into words."

END_OF_DOCUMENT_TOKEN_TO_BE_REPLACED

To their family and friends, Arthur and Jolie Huntington were the perfect couple. He was a respected, longstanding member of the U.S. Secret Service, and she was a housewife who home-schooled the couple's two children, 12 and 15.

Arthur Huntington, 41, is the cheapskate who refused to pay a Colombian hooker $800 for a night of "high quality" sexual services on April 12 -- launching the biggest internal and external investigation into the agency in 150 years.

After being stripped of his top secret clearance and placed on suspension, Huntington was among the first of the 11 agents under investigation to be fired.

Now, the submissive wife of the disgraced former agent vows to stand by her man.