In a series of tweets, the truculent Minaj bashed a certain blog for writing fake stories.

"I don't address dumb shit. I always assume intelligent ppl understand these "stories" are 4 entertainment purposes only. But clearly... -_-," she tweeted to her 4 million followers. "& 4 da record, only reason I addressed this is b/c its costing some1 their job. But let it b known : u mufuckas neva cost young NICK a dime!"

As you know, Rose was fired by the prestigious CAA agency after the blog published graphic nude photos of Rose "busting it wide open" (according to my readers).

Rose admitted it was her in the pics but she accuses Minaj's boyfriend/road manager -- the immature Safaree Samuels -- of sending the pics to himself after she let him hold her laptop.

END_OF_DOCUMENT_TOKEN_TO_BE_REPLACED

Singer Lauryn Hill took her family, including baby daddy Rohan Marley, to Broadway's Spider-Man, Turn Off the Dark last night. Hill, 36, who is 5 months pregnant, took snapshots with the play's cast members backstage at the Foxwoods theater in NYC.

Lauryn and her children look beautiful! Hill and Marley have 5 children together. It's unclear who the daddy of her unborn baby is after Rohan took to his Twitter page to deny the baby's paternity.

4 Fulton County jail workers -- a Fulton County Sheriff's deputy and 3 detention officers -- were taken into custody today during a FBI raid at the jail. The raid followed a yearlong sting operation conducted by the FBI.

According to the Atlanta Journal Consitution, the 4 men were cited in a federal indictment on 11 counts, ranging from possession of cocaine and marijuana with intent to distribute to extortion under color of official right.

The arrests comes nearly 2 weeks after a Fulton County jail inmate shot another inmate with a derringer handgun that was found hidden behind a ceiling panel.

A subsequent search of the facility turned up 20 cellphones, multiple phone chargers and plastic zippered bags full of marijuana. The jail was on lockdown today while the arrests were made.

END_OF_DOCUMENT_TOKEN_TO_BE_REPLACED

I guess Dwyane Wade isn't the only star caught creeping with a blonde recently. Chris Hansen, the austere host of MSNBC's long running series 'To Catch a Predator', was caught cheating on his wife with a blonde reporter while on assignment in West Palm Beach, Florida.

According to London's Daily Mail, Hansen was caught in a sting by the National Enquirer. Hansen, 51, has been engaged in a four-month affair with Kristyn Caddell, a 30-year-old news anchor for an NBC affiliate, according to Popeater.com.

END_OF_DOCUMENT_TOKEN_TO_BE_REPLACED

Anytime a man starts dressing up real fancy and putting lotion on his knuckles, you know he's doing it to impress somebody -- and that somebody isn't you.

By the way, the following are not my words. They belong to the Gossip Jacker. Please take your grievances to him/her, and to Choco aka Hippie who re-posted this in my comment section:

Jacked from a random message board

It looks like Dwayne and Gabby agreed to spend some time apart for unknown reasons back in late March. Since then Wade has been caught up with some Kim K. look-a-like right down to the big booty and all. He’s been seen with this Betty everywhere around Miami and it looks like Wade might have fallen for this girl… but now Gaby is trying to get back in the picture and now Dwyane is caught with his back against the wall. My girl told me that D is hardly ever with Gabs but always with this white girl. She said ALWAYS. Supposedly, one of his teammates said Wade has said that him and Gaby are on seperate paths. Shes always focused on her work and he’s looking to have more kids and he wants to have that “brady bunch” type family and even though he loves Gaby, he wants a stay-at-home Mommy for his two boys. My friend said that Dwyane has been a different person since he’s met this new girl. He’s been like a teenager in love and has really come out of his shell. So far they’ve been really good at keeping this under the radar but it won’t be long before people start noticing. She also said wouldn’t be surprised if Dwayne ends up marrying this Betty, she said he seems that in love.

A woman died in a fall from the rooftop bar of the W hotel across the street from the White House in Washington DC yesterday.

The woman, who was not immediately identified, plunged 10 stories to her death after witnesses say she climbed over the railing and desperately clung to the building before losing her grip. The woman had been drinking at the rooftop bar of the W, according to the Daily Mail.

The death comes one month after two women fell 5 floors when they crashed through a window wall while "play fighting" at the W hotel in midtown Atlanta. Model LaSahawna Threatt, 30, (pictured at right) died at the scene. Her best friend, Ciara Williams, 25, remains hospitalized with serious injuries.

Falling glass from a W Hotel in Austin, Texas this month prompted the closing of the hotel until further notice. The hotel's management said 1,000 glass panes in the hotel's balconies will be replaced.

The manager of the midtown Atlanta W told the Atlanta Journal that the incidents of falling glass from balconies at the W in Texas were "quite different" and "totally unrelated" to the incident in Atlanta.

Two lawsuits have been filed by family members in connection with LaShawna Threatt's death.

Thanks to loyal reader Tiffany Ocasio for the tip!

He didn't say it in those exact words, but former child star Aaron Carter finally admitted that pop icon Michael Jackson tried to get him high and drunk so he could have his way with him. At the time, Carter, the younger brother of Backstreet Boy Nick Carter, was 15 and riding a wave of success as a teen pop star.

I never talked about it. This is the first time. I do…I miss Michael. I have spent such incredible times with him. I did things with him that nobody else did. But I was also troubled about what he did to me. Yes, he gave me wine. I mean, I could have refused, but I was 15. He gave me cocaine. I felt weird about that and other stuff. We spoke afterwards, hours and hours, on the phone. I admired Michael, but his behavior bothered me a lot. Then my mother called the police.

I believe him. Rumors swirled for years about Jackson's interest in the adolescent Carter. But Carter consistently denied the rumors. Carter, now 23, fit the profile of the young, white tenderoni's that Jackson was attracted to. Jackson even dyed his eldest son's hair to make him look more like Carter.

END_OF_DOCUMENT_TOKEN_TO_BE_REPLACED 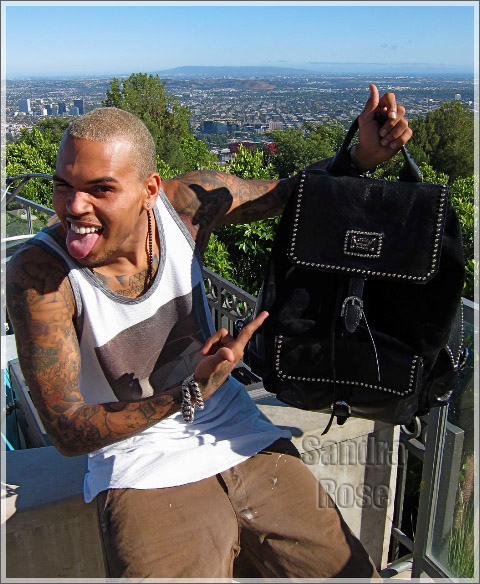 There is no doubt that singer Chris Brown influences the fashion style and trends in today's popular culture. I can't go anywhere with my MCM Visetos Cognac backpack, like the one Chris Brown has, without being stopped by young thugs asking me where I got it. I had to stop wearing it! Will Brown do the same for the brand new backpack from the Louis Stewart Collection? 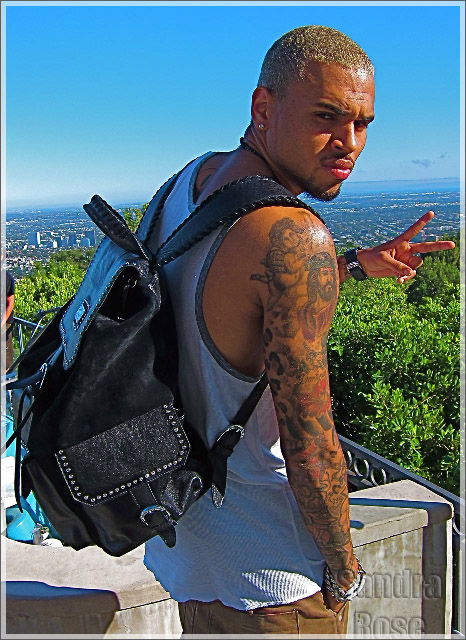 The Rockstar backpack comes in black nubuck with leather pockets and leather trim, accessorized with Swarovski Crystals! Brown was spotted wearing the hawt backpack on the set of his new music video yesterday in Los Angeles. Every bag in the Louis Stewart Collection is handmade and custom ordered to your specifications and comes in a variety of colors and skins, including Ostrich and Gator!

This backpack can be yours if you hurry over to www.louisstewartcollection.com before it's sold out!

Thanks to Alex Thomas for the pics!

Update: According to the Huffington Post, Mark Halperin was suspended from his position as an analyst on MSNBC this morning.

We here at Sandrarose.com wholeheartedly believe in the Constitutional right to free speech. But what MSNBC's Mark Halperin said about U.S. President Barack Obama went way over the line of common decency and respect.

According to the Washington Post blog, Halperin, a political analyst on MSNBC, called Obama "a dick" during Thursday morning's live broadcast of “Morning Joe.”

Halperin asked if there was a 7-second delay on because he wanted to comment on "how the president behaved" during a press conference that Obama held on Wednesday. Halperin then said, "I thought he was kind of a dick yesterday."

Halperin immediately apologized for his "joke" when he was told there was no 7-second delay -- but his apology was neither honest nor sincere. Remember, Haperin asked if there was a 7-second delay on, so he knew what he was going to say before he said it.

The left-wing media is treating Halperin's comments as a slip of the tongue, or a "gaffe" -- this is the codeword they use when they hold one of their own in high regard, and they don't want to ruin his career.

Imagine what would have happened if Glenn Beck or Sean Hannity called Obama "a dick" on live television.

Watch excerpts of what he said below: