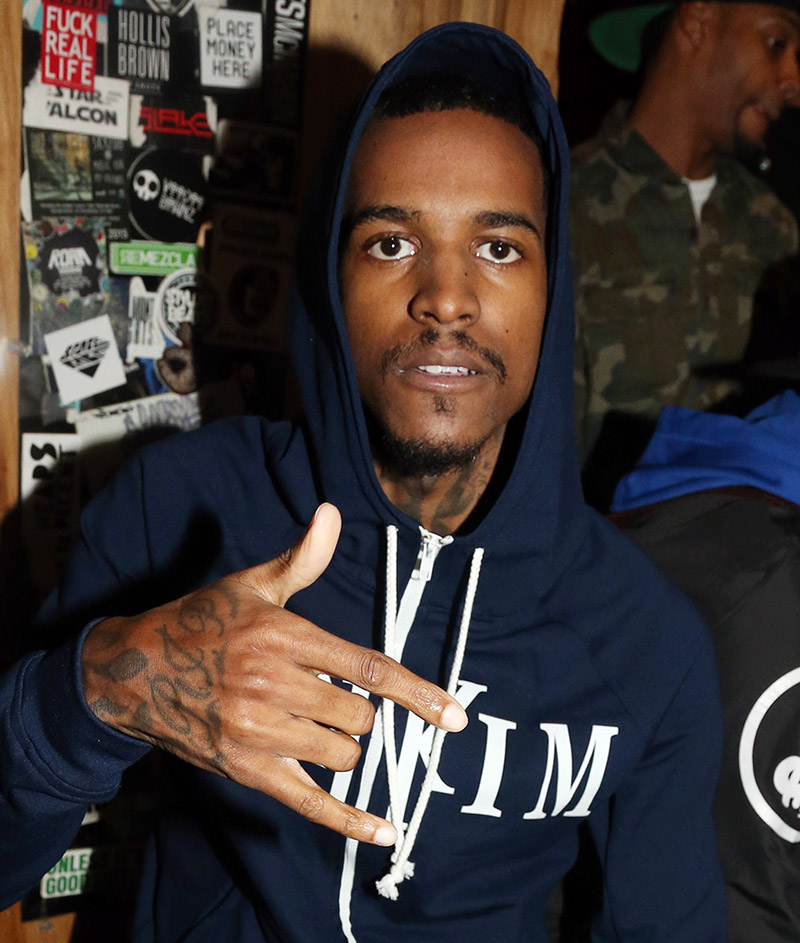 Rapper Lil Reese, who made a career out of mocking his dead opps, was shot and wounded in a parking garage in downtown Chicago Saturday morning.

Reese, born Tavares Taylor, was shot along with two other men. All three men were transported to a Chicago hospital. Another man is still at large.

A stolen Dodge Durango was crashed outside the parking garage. The vehicle was riddled with bullet holes, @CWBChicago reports.

The hashtag "Lil Reese dead" began trending on Twitter.com after someone uploaded grisly cellphone video of the wounded rapper spitting up blood. He is handcuffed and struggling to breath.

A woman can be heard accusing Reese and another man of stealing her car. "You wasn't driving, but you stole my sh*t!" she told another wounded man.

On November 11, 2019, Reese was shot in the throat at a busy intersection in Country Club Hills. Witnesses told police Reese was shot by a gunman following a brief car chase.

A week later, Reese sent out a tweet noting he is "Alive and well."

A day after he was discharged from the hospital, he release a track titled "Come Outside."

Reese, 28, is among a crew of hardcore gang members-turned-rappers who launched Chicago's drill scene in the early 2010s. Reese is affiliated with former gang members Lil Durk, Fredo Santana, and Chief Keef.

Durk and Keef fled Chicago after their gang affiliates were killed in turf wars. Durk moved to Atlanta where he was joined later by Chicago rapper King Von. Both men were arrested in connection with a shooting and kidnapping in Atlanta in June 2019.

Von, 26, was still awaiting trial on attempted murder charges when he was gunned down by aspiring rapper Lul Tim, 22, during a fistfight with aspiring rapper Quando Rondo, 22, outside an Atlanta nightclub On November 6, 2020.

Update: Video shows Reese sitting up with the help of police after the shooting.

Rappers Lil Durk (red jacket) and Pooh Shiesty (black bubble jacket) filmed a music video in a packed Chicago nightclub this week. Chicago is one of the cities still on lockdown 10 months after the Corona hysteria first swept America.

In this photo from the music video, filmed inside a Chicago nightclub, no one is wearing a face mask or social distancing.

Okayplayer tackled the "skepticism... displayed within hip-hop circles" in an article titled "Hip-Hop Has An Anti-Vaccine problem."

Young people live in an era of rising death counters, mask mandates and state lockdowns that are unprecedented in modern history.

The youth are reminded daily of "overwhelmed" hospitals and "surging cases" of Covid-19. But the male-dominated hip-hop industry continues to thrive despite the Corona fear mongering.

Rappers such as Royce da 5'9", Freddie Gibbs, and Nas thumb their noses at vaccines. Their respective albums and EPs contain tracks with recurring themes of general distrust of the government and vaccine manufacturers.

Royce da 5'9"'s Grammy-nominated album The Allegory contains a track titled "Tricked," in which the 43-year-old links the flu vaccines to autism.

"From day one at the hospital they target our children/Say they gonna immunize 'em they somehow get autism."

On the song "FUBU," he raps: "My son got autism from injection by syringes."

In an interview with Complex.com, Royce didn't apologize for his anti-vaxx views, which he says are not dangerous.

"It's not a danger, because I'm speaking the facts," he said. "People who are against the anti-vaxxers, where are their facts at? What facts do they have? Was there something that America told them? Because I operate under the edict that America is guilty until proven innocent."

Last year, Freddie Gibbs, Killer Mike, and Pusha T collaborated on the track "Palmolive," which contains this rap by Gibbs: "Maxine Waters, f**k your poison, keep your vaccines off us."

Nas's anti-vaccine lyrics date back to 2001's classic Stillmatic. on the song "What Goes Around," he rapped: "doctors injectin' our infants with the poison."

Atlanta-based rapper Offset, of the group Migos, expressed his distrust of Pfizer's vaccine, which was approved by the FDA for emergency use on Dec. 11.

Offset referenced a viral photo that shows three out of 4 vaccine recipients who allegedly contracted Bell's palsy after getting the vaccines. But the photo has since been debunked.

Rap legend Pete Rock questioned the legitimacy of giving vaccines to healthy people who aren't at risk for the virus.

"Vaccine shit is real stupid. How you giving vaccine to people who arent sick?" he tweeted.

Meek Mill singing with auto tune is cringe-worthy. He's not even trying anymore -- not that he was a great rapper to begin with.

This track is a terrible waste of a perfectly good sample from Tony! Toni! Toné's hit single, "It Feels Good."

The music video contains the obligatory stacks of cash, drugs, luxury vehicles and diamond chip chains. Absent are the scantily clad women. Maybe the video budget wasn't big enough to include them.

As you know, Philly rappers chased Meek off social media and banned him from North Philly for telling them to put their guns down amid a series of killings involving underground rappers.

"I'll get all the main big artist in Philly a deal if they put them bodies behind them and squash them beefs," he said. "I hear about ... got some hot young bulls from my city but they all beefing! And that's just a idea but I'll push thru with my city if y'all make it thing! It's like 5 clicks that’s talented but they deep in! And get they most attention when they beefing!" he continued.

The Urban Dictionary website refers to drill rap as a "bullshit genre of rap that started off in America" and "somehow crawled its way into the UK."

Drill rap originated on the South Side of Chicago in early 2010. It is a genre of rap music made by and for gang bangers.

"Drill" means to shoot someone. The most popular drill rappers are either in prison for murder, deceased or will soon be deceased.

When popular drill rapper King Von was gunned down in Atlanta recently, most of my readers had never heard of him.

Also flying under the radar are YNW Melly (pictured top), Lil Durk, NBA Youngboy, Chief Keef, Lil Reese and others -- all of whom are alleged killers. YNW Melly is in a Florida prison awaiting trial for double murder. 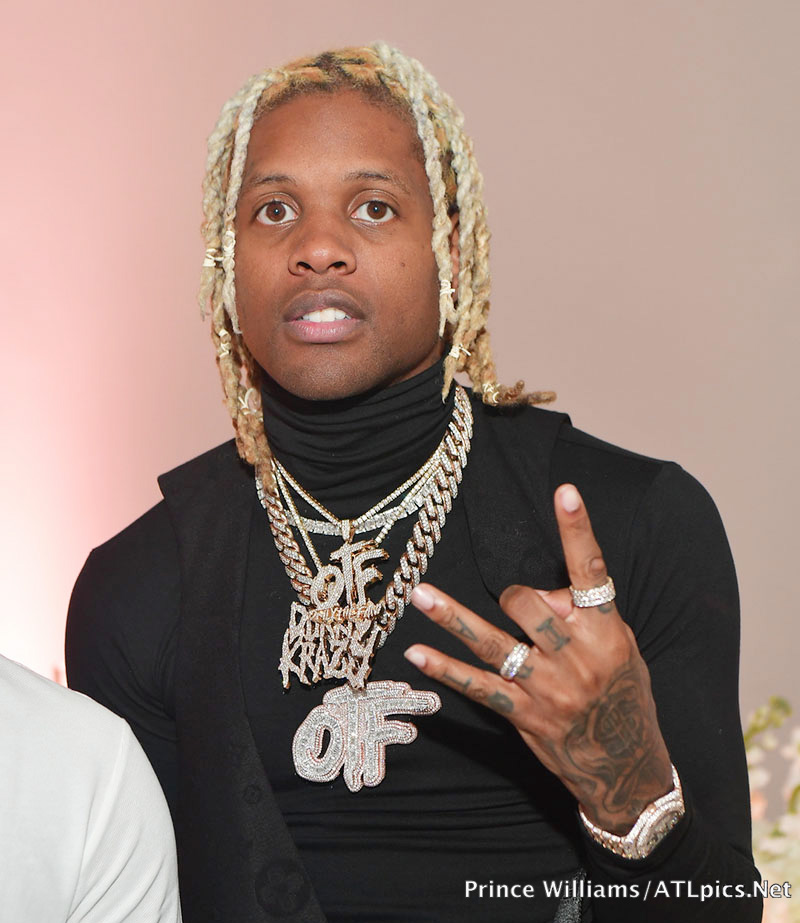 Chicago rapper Lil Durk (pictured) is out on bond while awaiting trial in Atlanta for shooting at a man near the Varsity restaurant last year. He was arrested alongside the late King Von.

While out on bond, Lil Durk is making music with wannabe drill rapper Drake.

Drill music has infiltrated the Black community just as gangster rap dominated the hip-hop industry and helped to usher out R&B music in the 1980s.

Drill rap is behind a string of murders of rappers over the past decade. Rappers who want to make a name for themselves kill other drill rappers, then enjoy the clout they earn until someone kills them.

Mainstream magazines eagerly promote drill rap to their readers as the next big thing. There's money to be made in music that is detrimental to Black men.

Gone are the talented, law-abiding, middle class rappers who rapped about dropping bodies and moving weight - as if they lived that life.

Music influences the mind and soul of young men. Drill rap should concern you if you're the mother of a young Black male. 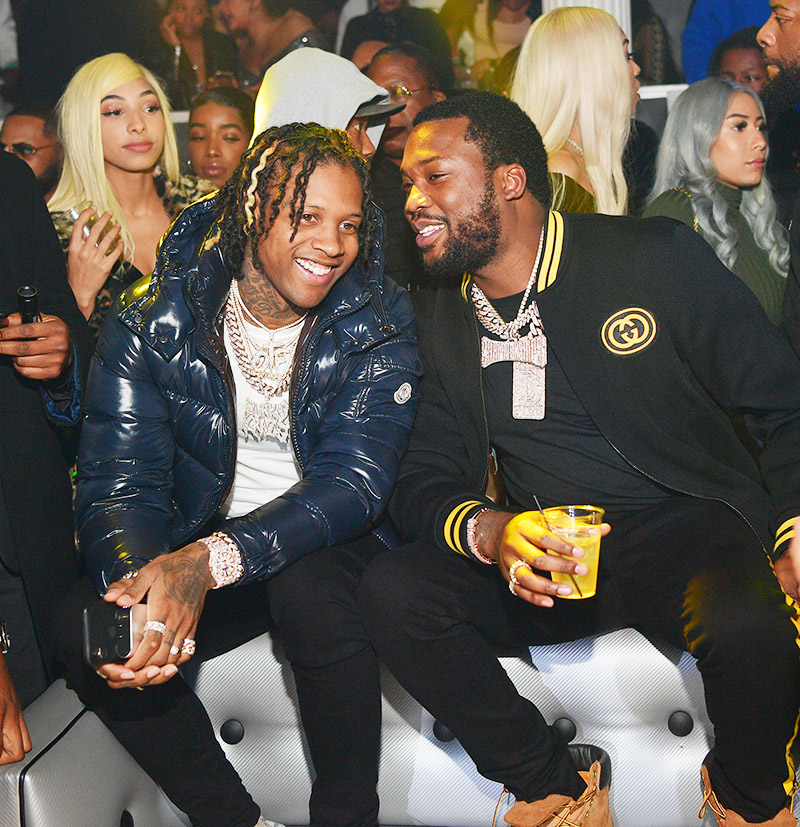 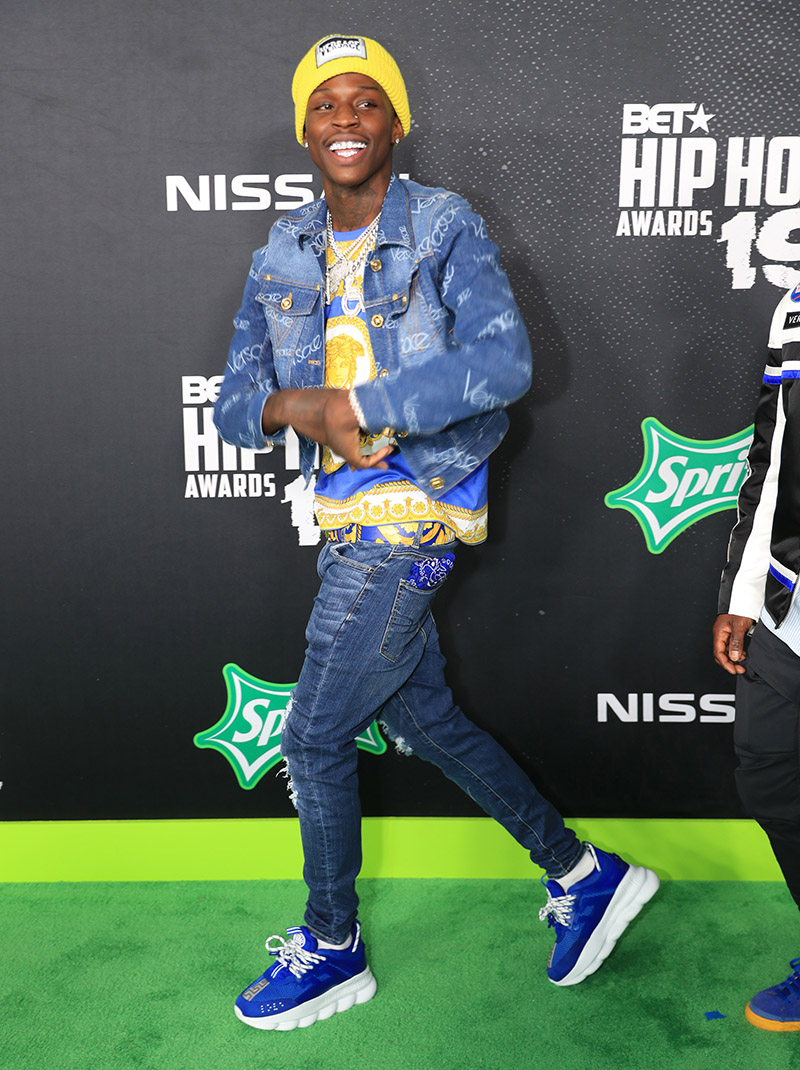 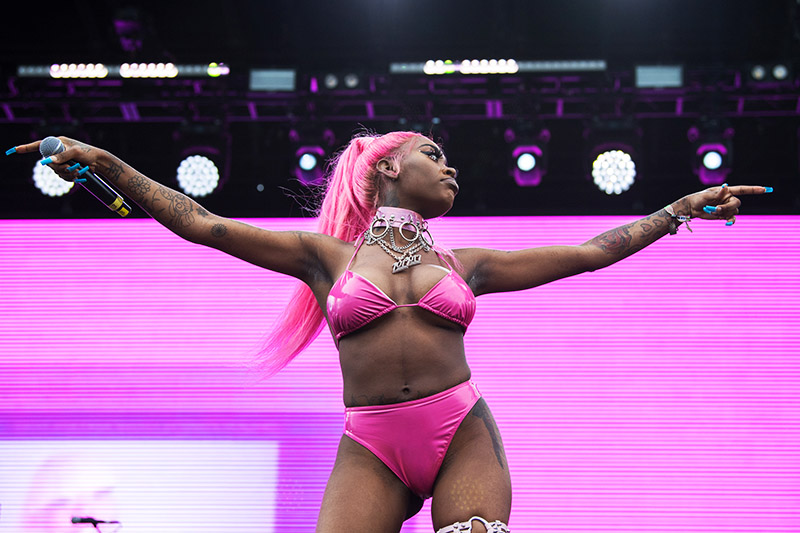 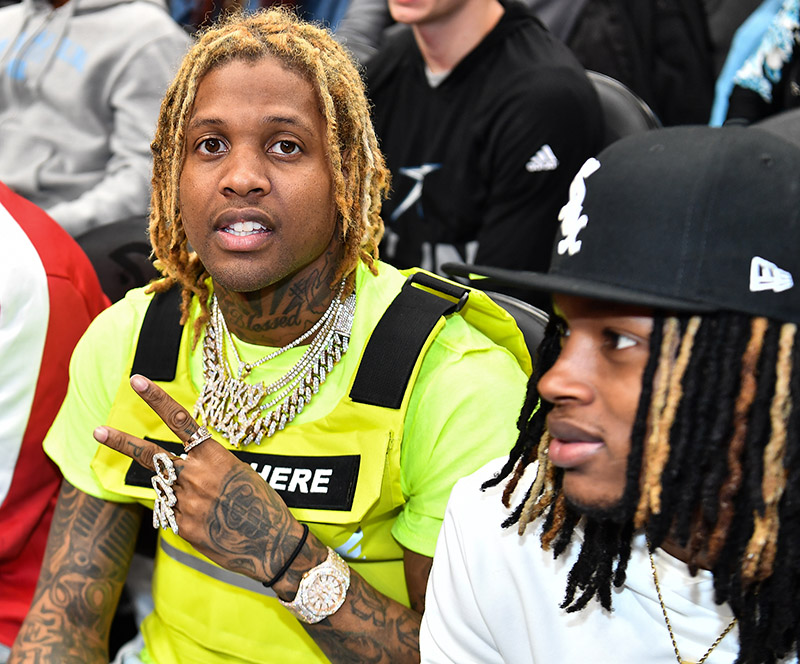 Lil Durk (right) is linked to yet another shooting - this time it's fatal. A teenager who was featured in a viral video with rapper Lil Durk's artist, OTF Dede (left), was shot to death on Sunday, January 19.

Chicago police say a 17-year-old female was shot and killed in a vacant lot in the 6700 block of South Parnell Avenue around 6:30 p.m.

Witnesses say three males pulled up in a silver sedan. They got out of the sedan and one of the males fired shots at her.

OTF Dede was forced to perform oral sex on the girl in a video that went viral. Thugs reportedly set him up with her in a hotel room.

They later burst into the room and forced OTF Dede to perform oral sex on the girl at gunpoint. The girl was menstruating at the time.

Police believe OTF Dede's enemies killed the teen to shut her up.

The rapper was beaten, robbed and his braids were cut off. The video went viral on social media.

Following the attack, Lil Durk tweeted: "The Internet is the news version of the streets just more snitching."

Lil Durk, a 27-year-old Chicago native, is currently out on bond following his arrest for attempted murder in Atlanta last year. 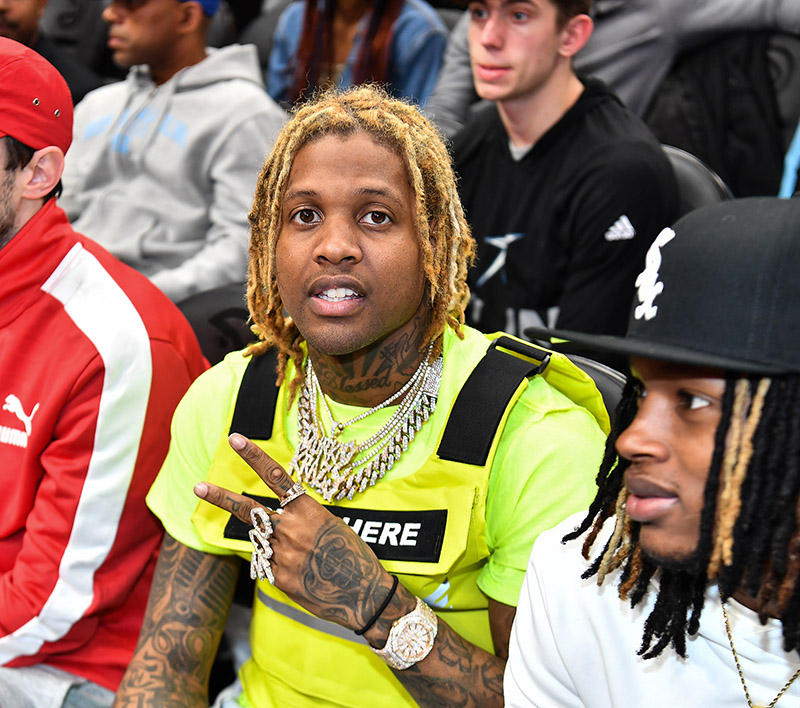 END_OF_DOCUMENT_TOKEN_TO_BE_REPLACED

Last week, a photo surfaced online showing Loaf getting cozy with her "boyfriend", the aforementioned rapper.